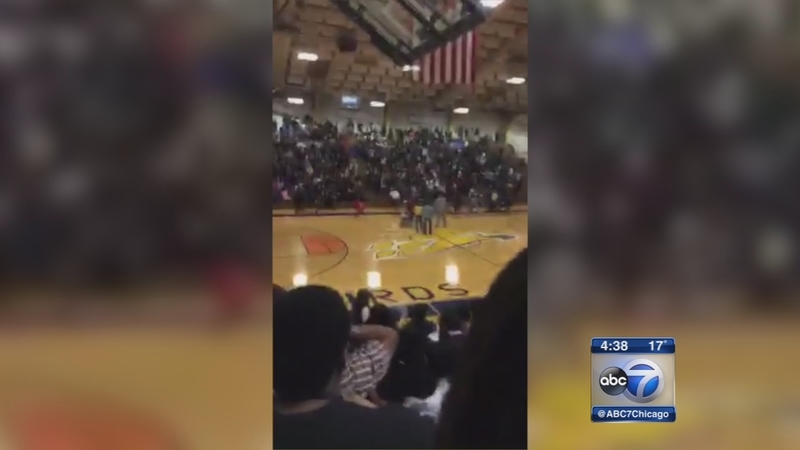 SOUTH HOLLAND, Ill. (WLS) -- It was pandemonium at Thornwood High School when a firecracker went off. Now, students who say they had nothing to do with this senior prank are upset that they got suspended.

Cell phone video captured the moments after students heard a loud noise during a pep rally in the gymnasium at Thornwood in South Holland.

"Everyone just picked a door, and they ran. Everyone just ran anywhere. The staff was running. The students (were) running because no one knew what was going on," said Evan Reid, senior.

The commotion January 29 was caused by someone setting off a firecracker. The school took action, suspending 33 students last week, including those who say they had no involvement with this senior prank.

Reid says he was suspended for 10 days because he was in a group chat discussing a prank.

"Originally, they were to grab silly string and spray all the seniors. Someone was like, 'We should get a firecracker.' It was just a suggestion. No one took it upon themselves to say, 'I am about to go to the store and purchase it,'" Reid said.

Morgan Gant and Jose Cerda say they weren't even at the rally, but they too got suspended.

"I just got suspended for making a tweet about the pep rally and being in the group chat," Grant, a senior, said.

"I was mad because I didn't do nothing. I have never been suspended or anything like that," Cerda, a senior, said.

Thorton Township High School District 205 officials say the investigation is ongoing, but the decisions were made from credible evidence.

Reid says the only person who deserves a suspension is the person who set the firecracker off. He's worried about how it's going to affect his college prospects.

"This right here with them giving me ten days out of school, it is not going to look good, like, they are actually ruining people's lives who had nothing to do with that," Reid said.

The incident is still under investigation and the students involved can appeal their suspension.

A district statement reads: "There was an incident at Thornwood High School during an assembly on January 29, 2016, The administration at Thornwood High School and South Holland Police Department are currently investigating the matter. 33 students were suspended and will be afforded their rights to due process as outlined in the Student Code of Conduct and Thorton Township High School District 205 Board of Education approved policy."