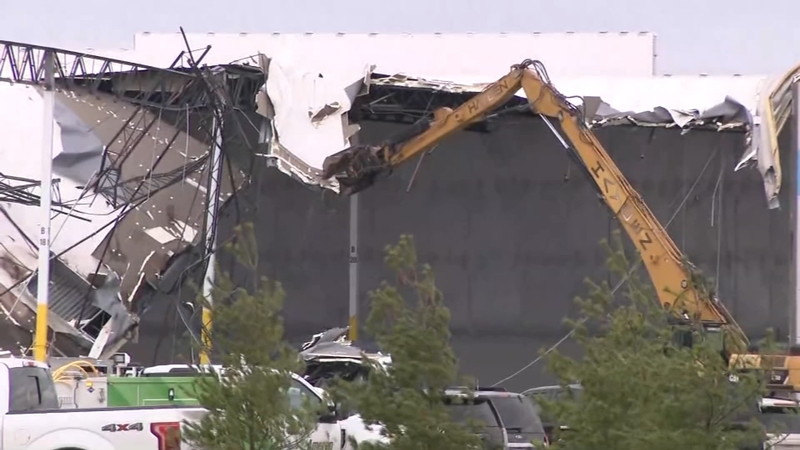 Officials said others were injured after the roof caved in at the facility near Edwardsville, Illinois. It's believed a tornado was to blame. Police said its still unknown how many people were in the building at the time of the collapse and how many people remain. The families of those inside the facility have said they are desperate for answers.

During an afternoon news conference, first responders said search and recovery efforts will likely take another three days but that they don't expect to find any more survivors.

The National Weather Service said damage indicates the tornado that hit was at least an E-F-3.

So far there were 22 reported tornadoes through the South and Midwest in one day.

It is not immediately clear how many people were hurt, but officials said one person was flown by helicopter to a hospital. Rescue crews are still sorting through the rubble to determine if anyone was trapped inside, officials said.

Gov. J.B. Pritzker is in Edwardsville and said at this time "we are one Illinois."

Pritzker said he has spoken to both President Biden and to Amazon about providing assistance to those impacted by the tornado.
"We're deeply saddened by the news that members of our Amazon family passed away as a result of the storm in Edwardsville, IL. Our thoughts and prayers are with the victims, their loved ones, and everyone impacted by the storm. We also want to thank all the first responders for their ongoing efforts on scene. We're continuing to provide support to our employees and partners in the area.," said Amazon spokesperson Kelly Nantel in a written statement.

In a tweet Sunday evening, Amazon founder Jeff Bezos said " we're heartbroken over the loss of our teammates."

The news from Edwardsville is tragic. We’re heartbroken over the loss of our teammates there, and our thoughts and prayers are with their families and loved ones. (1/2)

According to Amazon, when a site is made aware of a tornado warning in the area, all employees are notified and directed to move to a designated, marked shelter in place location. Emergency response training is provided to new employees and that training is reinforced throughout the year.
Amazon's two sites in the immediate area of the storm are now closed. The building directly impacted by the storm is a delivery station. It opened in July 2020. The facility is approximately 1.1 million square feet and employs approximately 190 employees across multiple shifts.