WLS
By Sarah Schulte
CHICAGO (WLS) -- Broadway in Chicago's "Hamilton" is coming to a close after more than three years, and two of the play's main actors are planning to take some time off to pursue a new business idea.

They might be enemies on stage, but they're golf buddies in real life. Miguel Cervantes, who stars as Alexander Hamilton, can blame the man who plays King George for his off-stage passion.

"It's nice to have a release and a place to get away from it all," Cervantes said.

For him, getting away from it all means spending hours at Midtown Athletic Club hitting golf balls.

Cervantes and Andrew Call have been close friends since their early days on Broadway. When Call was cast as King George in the Chicago "Hamilton" cast, he convinced Cervantes to take up the sport in their free time.

"Not only were we together every night, we decided we don't have enough of each other," Cervantes said. "Let's be together every day on the golf course. My wife was wondering about my golf husband."

The craziness for the sport has pushed them to become entrepreneurs.

Cervantes is always losing tees, a ball marker and divot tool. He came up with the idea to put all three in a single device, and a "Hamilton" costume designer helped him execute it.

"She had a hair clip and some fabric and we created the first one," Cervantes said.

It's called Shu Caddy. The device can clip on your shoe or waist.

Before the product went to market, Cervantes and Call would make them backstage.

"He's in his wig, I'm in my outfit and we are tinkering," Cervantes recalled.

As the very successful Chicago production of "Hamilton" prepares to end, the two actors, golfers and investors said what will keep their success going is their friendship.

Both Cervantes and Call plan to sell their Shu Caddy products before returning to acting.
Report a correction or typo
Related topics:
arts & entertainmententrepreneurshiphamiltonarts & culturegolftheaterbroadway in chicago
Copyright © 2021 WLS-TV. All Rights Reserved.
GOLF

No charges expected against Tiger Woods in car crash 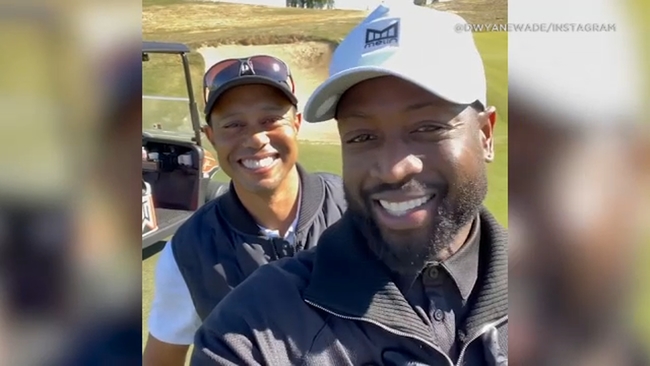