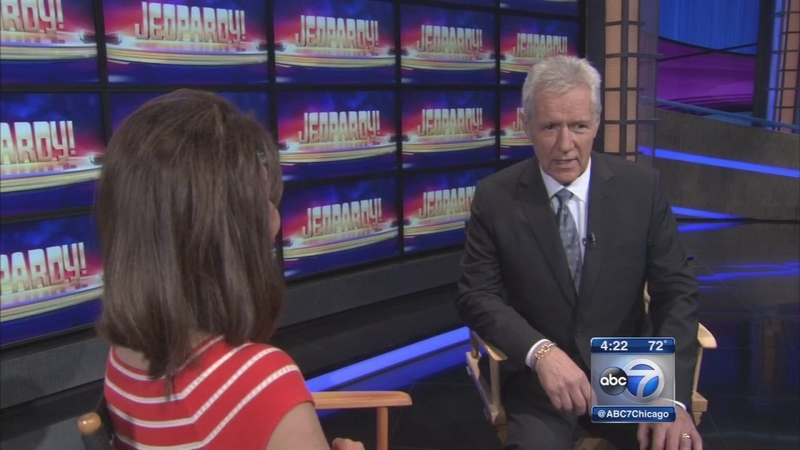 CHICAGO (WLS) -- At the age of 74, Alex Trebek is starting his 31st season as the host of the Emmy-award winning Jeopardy.

"We've done well in Chicago over the years .. a lot of bright people in Chicago and they like our show .. I can't complain," Trebek said.

He tapes two days a week, five shows a day. After all these years, would he be any good as a contestant.

"I'm older now, my reflexes are slower. I couldn't play the games as well," Trebek said. "My memory is not what it used to be. I have forgotten a lot of stuff. I can't recall it as quickly as I used to."

But it's that same humble attitude that has kept Trebek popular, along with his belief that it's not him. But the contestants and people watching who are the stars of jeopardy. It's why he spends commercial breaks taking questions from audience members.

Between show tapings, he also talks to reporters, graciously recording promotion messages, sitting down for an interview. Something audiences may not know: the distinguished, handsome, urbane trebek is happiest when he's a handyman around the house.

"I do electrical stuff, gardening, outdoor furniture cleaning and repair, you name it, I'll do it," he said. "If I need a handyman I can call you? Yes, but I'm very expensive."

And much to the chagrin of his Jeopardy producers, he's also accident prone.

"I've had a few examples of coming off the roof and hitting the ground very, very hard. Ladders have a great amount of antipathy toward me . They are always trying to mess with me by slipping out from under me, twisting like a bucking bronco," he said.

It was big news when the mustache disappeared. Trebek grew it back for the summer, only to shave it off again.