"It's the fastest launch of any roller coaster in North America," said the park's director of marketing, John Krajnak.

Maxx Force is being referred to as a "triple record breaker" because ,"You immediately then travel up 175 feet for the world's tallest double inversion. Coming off that you pick up a lot of speed and you're going to travel 60 mph through a corkscrew loop. It's the worlds' fastest inversion," Krajnak added.

The park's 17th roller coaster officially opens to the public on July 4, but I was able to go on a test run Tuesday. Before I reached the ride platform, I could hear the takeoff thud booming a hundred yards out; and even though I knew the cannon launch was coming, there was no way to fully prepare for the moment I zipped through the tunnel and up into the spiraling ride.

"That was horrifying," said Special Olympics athlete Jack Klawitter after one of multiple times he rode Maxx Force Tuesday.

Klawitter and others from Special Olympics Illinois were at Six Flags Tuesday to promote the upcoming Coaster Challenge, which takes place at the Gurnee park on September 21.

"Ride the distance of a 5K, 10K, a half marathon or a marathon on roller coasters instead of running it," explained Special Olympics Illinois' Alexandra McMillin

McMillin added it would take 26 runs on Raging Bull (the park's longest coaster and thus the one you would need to ride least to hit the various Coaster Challenge markers) to complete a marathon. But the money goes to a great cause, supporting Special Olympics athletes like Jack and his Challengers baseball teammates.
"It supports our 23,000 athletes statewide and the 18 different sports that they compete in all year long," she added.

The coaster trains are modeled after Formula One racing cars.

Scared by Maxx Force? Excited? Find out for yourself what it's like starting Independence Day. But for now, join me on the ride!
Report a correction or typo
Related topics:
arts & entertainmentgurneetheme parksix flagsroller coaster
Copyright © 2020 WLS-TV. All Rights Reserved.
RELATED 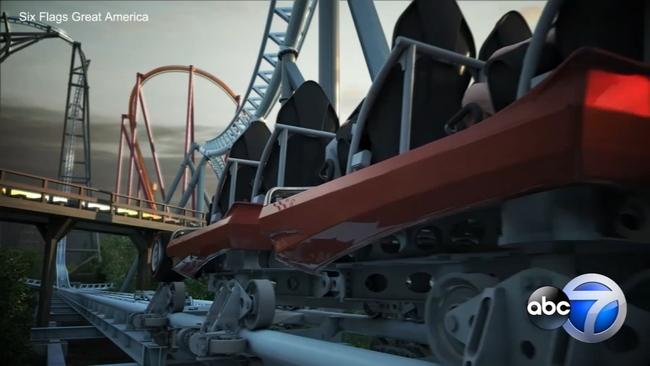