Ex-girlfriend of suspect killed in Gary shootout shares history of violence, says he should have been jailed

ABC7 I-Team Exclusive
WLS
By Chuck Goudie, Cate Cauguiran and Alexis McAdams
GARY, Ind. (WLS) -- Police said Tuesday that a man who was killed in a shootout after injuring two Gary police officers while trying to arrest him murdered his girlfriend inside a Merrillville hotel room.

One of the officers was shot in the chest but saved by his bulletproof vest and the other officer was hit by shrapnel. The suspect, 29-year-old Keenan McCain, was killed in the shootout, authorities said.

Two Gary police officers were shot Monday in the 2400-block of Waverly Drive, according to Lt. Thomas Pawlak.

The ABC7 I-Team spoke exclusively with a former girlfriend of McCain who shared her story of surviving the violence, raising questions about why he wasn't locked up.

Until the I-Team called, Brittany Luster hadn't heard about what her ex-boyfriend did in northwest Indiana, but says Keenan McCain should have been locked up for what he did to her last summer - something that might have prevented what happened on Monday night.

The I-Team uncovered ceaseless charges of gun violence and brutality against McCain and a jarring story of survival from his previous girlfriend.

"He had jumped on me, he had choked me and he put a gun in my face. Threatened to kill me," Luster said. "Yeah, he was serious. He ended up pulling a gun out on my father."

In an interview Tuesday afternoon, Brittany Luster said she met Keenan McCain online when both of them were living in Indianapolis last year.

The relationship was troubled from the start. According to a police affidavit obtained by the I-Team, last summer on various occasions McCain "pulled a black handgun and pointed it at her face... began punching her in the right side of her head." He put his 40 cal "pistol in her mouth and said he would kill her" and was "stompkicking her legs." McCain hit the "top of her head...in a hammer fist motion" and asked "do you want your brain to bleed?" then "got atop of her and began choking her."

"Yeah, he choked me many times and made me black out," Luster said. "He's never actually shot at me. He's pulled a gun out on me several times and he put it in my mouth maybe a couple times."

Luster said she wasn't surprised to learn that he killed his girlfriend and was in a shootout with police.

McCain was charged with attempted strangulation, gun violations and intimidation, but not locked up.

Police in Merrillville, Ind. provided an update on the investigation into the murder of a woman at a hotel in Merrillville and the suspect's death ina shootout with police in Gary

Police say he killed his girlfriend in a Merrillville hotel by strangling her and when he opened fire on police and wounded two Gary SWAT officers, there was a warrant for his arrest from the summertime clash with Brittany Luster.

"I was concerned for other women... whoever he came across," Luster said.

She said he should have been in jail.

Authorities in Marion County, Indiana were familiar with Keenan McCain even before the violence last summer. In 2017, he was charged with biting and battering another previous girlfriend as his own young children watched. Those felonies that also could have resulted in jail time were dropped when the woman decided not to press charges.

The family of Betty June Claudio are in disbelief that their sister, aunt and mother is now gone.

The family of Betty June Claudio are in disbelief that their sister, aunt and mother is now gone. Her nephew, Carlos Claudio, spoke to ABC7 via FaceTime from South Dakota.

"I can't even really put that into words to be honest with you. It's like ripping out a piece of your soul honestly. We'll never really feel complete again," Carlos Claudio said.

Merrillville Police said Claudio was found strangled to death in a hotel room. Detectives say the 45-year-old Gary woman had been dead for 12 hours before a hotel maid found her. The one suspect in her murder was her boyfriend, 29-year-old Keenan McCain. Investigators say his DNA and clothes were found in Claudio's hotel room, which he paid for.

"On January 13 officers were able to receive credible information that McCain was located in the area of the Westbrook apartments," said Det. Aaron Ridgway, of the Merrillville Police Dept.

As officers tried to arrest McCain on Monday, police say he barricaded himself inside one of the homes with a gun. Then the SWAT team moved in and McCain shot at officers, injuring two. Officers fired back, killing McCain.

"She was a great a woman and this type of thing should have never happened to someone like her," Carlos Claudio said.

Should pets be allowed in grocery stores? Consumers divided 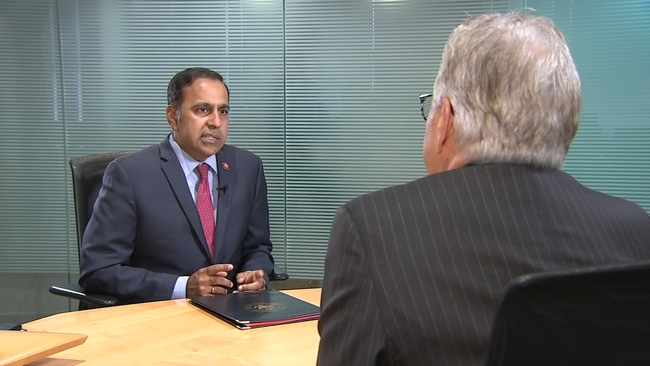