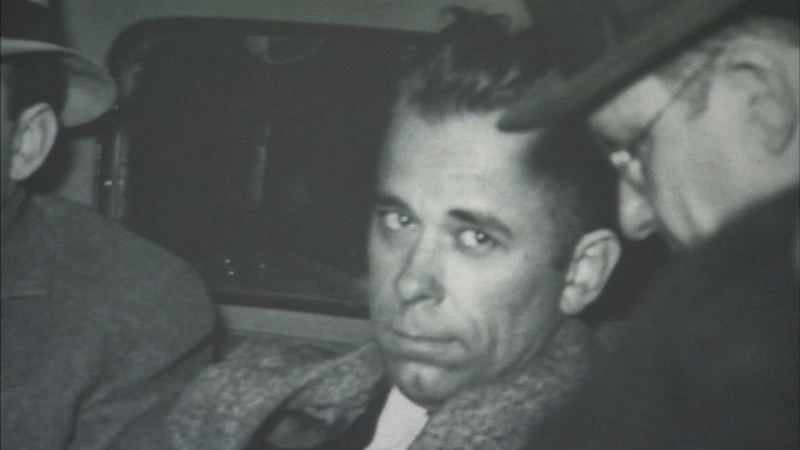 CHICAGO (WLS) -- Federal authorities have been engaged for decades in a full-throated assault on Dillinger naysayers and it is a campaign that continues to this day.

On July 22, 1934, even as the body was on full display for hours in an alley next to Chicago's Biograph Theatre, there were rumors that it wasn't actually gangster John Dillinger.

And as hundreds of Chicago politicians and well-connected gawkers would later view his corpse at the Cook County morgue, some said it didn't look like the Depression-era desperado.

Rumors, speculation and stories about a Dillinger death-surrogate have bubbled up the past 8 decades, but this week came to legal fruition as a pair of his claimed-relatives asked for an exhumation order so that DNA could be cross-checked.

As the ABC7 I-Team first reported on Wednesday, Dillinger kin has filed paperwork citing evidence that the carcass' fingerprints, eye color, ear shape and physical condition did not match that of their dearly departed.

The FBI isn't buying it, and never has. A spokesperson for the FBI in Chicago on Thursday reiterated what the bureau has said for years: Dillinger was killed by their agents in 1934.

"I think there are a lot of stories out there about Dillinger that aren't true" says FBI historian Dr. John Fox.

The FBI had been following Dillinger for years in the gangster-era, then labeled as "Public Enemy No. 1," and tracked him on a late July evening to Chicago's Biograph Theatre on Lincoln Ave.

In an art versus life moment, Dillinger was taking in a gangster movie called "Manhattan Melodrama" with Clarke Gable and Myrna Loy.

"Upon our realizing that Dillinger had gone in to see the movie that we were able to convene a number of agents, along with some East Chicago police who were there to help us, and actually set up a stakeout, waiting, of course, through the movie until Dillinger came out the front of the theater" said historian Fox on a special FBI website aimed at dismantling Dillinger "myths."

Among the evidence cited by federal agents: two, separate, positive fingerprint matches between the cadaver and Dillinger. Much of the documentation about homicidal bank robber John Dillinger is contained in decades old I-Team files, a large portion of it compiled by late ABC7 investigative producer John O'Brien, a former reporter for the Chicago Tribune.

According to FBI and Chicago police records and Cook County coroner reports, Dillinger was shot multiple times by officers as he was about to fire on them with a pistol.

"Three of our agents fell in behind Dillinger and as he was approaching an alley just past the theater, he realized that he was being followed and started to break for the alley and was turning towards the agents who were following him, reaching towards his pocket seeking to pull out a gun that he had in there" Fox said. "Agents fired. Dillinger, of course, was considered armed and dangerous; had been involved in many shootouts already, some of them with our agents, and so they immediately began to fire at him. Of course, several of the shots hit; Dillinger ended up dying very soon thereafter."

Even though the nation's top outlaw was gunned down 85 years ago, FBI officials are taking a 2019 approach to fight suggestions that they didn't get their man.

On Thursday, a flurry of social media posts by the FBI directed followers to "What really happened to John Dillinger? Hear it straight from the FBI's historian."

What really happened to John Dillinger? Hear it straight from the FBI's very own historian:https://t.co/vaWSnUiort#tbt #throwbackthursday

A decision on whether to allow exhumation to go through is still not final, Indiana authorities tell the I-Team.