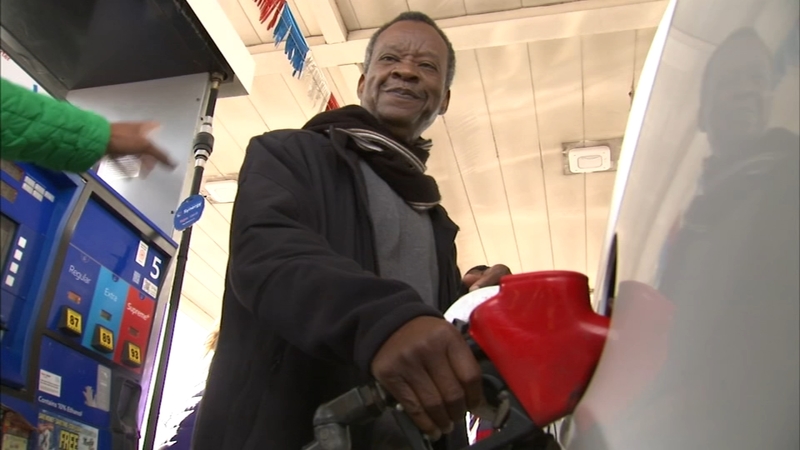 Starting at 7 a.m., each vehicle at participating gas stations could get $50 in gas pumped by volunteers until $200,000 is exhausted, as residents struggle with high gas prices. About 4,000 vehicles were expected to get their fill.

RELATED: What you can do behind the wheel to save money as gas prices keep rising

Lines stretched for blocks all across the city. By 7 a.m. at the Amoco located at 7201 N. Clark St. in Rogers Park, the line, which had started at 2 a.m., went all the way down Touhy Avenue to Sheridan Road.

"I've been out here since 5 o'clock this morning," said Tyensha Scott, who was waiting outside the South Lawndale Mobil at 28th and Kedzie.

"We gave money to buy gasoline, they can buy gas and continue to support their family," Wilson said. "We went that route. People don't have disposable money these days."

Antonio Galarza, who lives in Pilsen, was waiting for his chance with an almost-empty tank, was grateful he didn't have to spend $50 to fill up.

"A blessing," he said. "Thanks everybody who put the effort to help. It's so nice."

Gas station owners Khalil Abdullah and Amin Ibrahim said they would lower their gas prices during Wilson's giveaway, as well.

RELATED: When will gas prices go back down? Illinois drivers flock to Wisconsin, Indiana for cheaper fill-ups

"As gas station owners we decided to lower our gasoline prices during Dr. Wilson's gas giveaway in an effort to allow more cars to benefit from Dr. Wilson's generosity," Abdullah said.

Evanston carpenter Ricky Kimmons said the high gas prices have been hitting him hard. He was second in line in Rogers Park. It costs him $147 to fill up his Suburban.

"I was like, 'Is this for real?' And then I seen it on the news, so I started trying to find out the locations, and I was like 'oh, there's one right here by the house five minutes away.' Got right up, came right over here," he said. "It helps me tremendously, a whole lot, just don't know how much I appreciate free gas right now."

Wilson said he would like to try to do this kind of giveaway one or two more times.

The atmosphere turned into a sort of tailgate in some spots, with those waiting walking their dogs and befriending others in line.

"You're trying to provide for your family, you're trying to ... raise your children in the neighborhood, and this is a good opportunity to help us get from school back home," Niki Hammer said.

But the free gas caused traffic gridlock around most of the stations, contributing to a tough morning commute for many.

Cars lined up to get in on millionaire businessman Willie Wilson's free gas giveaway Thursday.

Chicago police are trying to direct motorists to ease the congestion.

While some praised Wilson for his generosity, others were unhappy with the traffic.

"Thank you Willie Wilson!" Melvaughn Thompson exclaimed as she jumped up and down. She was the first in line in Rogers Park.

But as some received free gas, others were burning it in traffic.

"Me being frustrated? I mean if it's worth it, if you want gas, you want free gas, then stay in a line, but, if not, then find something else to do," Reginald Williams said.

And there was also some controversy as some drivers tried to pump premium gas and couldn't.

Some angry drivers are planning to lodge complaints with the city.