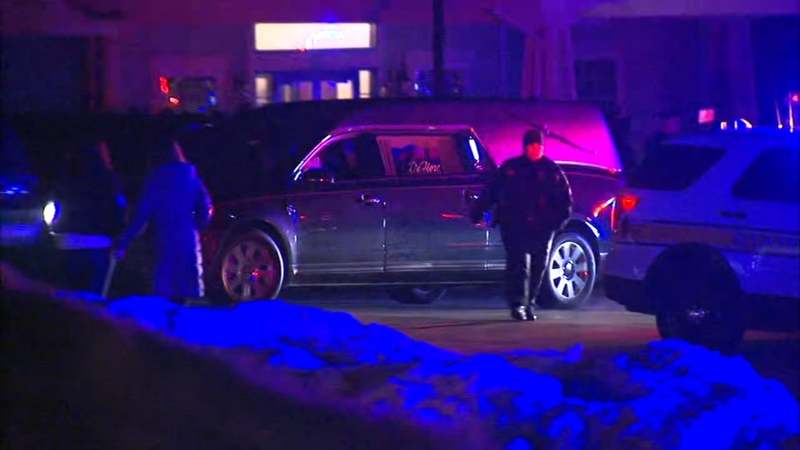 ROCKFORD, Ill. (WLS) -- A community is mourning a local officer assigned to the U.S. Marshals Fugitive Task Force who was shot and killed at a hotel in Rockford while trying to arrest a fugitive for a parole violation.

McHenry County Sheriff's Deputy Jacob Keltner, 35, was assisting a U.S. Marshals Fugitive Task Force in Rockford when he was shot.

The funeral will take place on Wednesday, March 13 at Woodstock North High School, 3000 Raffel Road in Woodstock. The funeral begins at 10:00 a.m.

Friday night Keltner's casket was escorted from the coroner in Rockford to a Huntley funeral home where he was welcomed with sadness and pride.

"We're here together," said Patti Olson, who was paying respects. "It's amazing, I mean, all these people with their respect. The police need to have more of this."

"Not only just do we feel immense sadness for this tremendous loss, but I'm also very proud of the community that we have here," said Sam Moore, who was paying respects.

Professionally, he was McHenry County Deputy Jake Keltner. But to two young boys growing up in Crystal Lake, he was dad.

Keltner was married with two sons who are four and six years old.

"I can't even imagine how that's going to be; not having their dad there is going to be very hard. Because he's a good dad," said Lisa Positeri, backyard neighbor. "I can hardly believe he was shot. I'm stunned."

Along with his wife and children, Keltner's parents live in the same Crystal Lake community, just around the corner according to neighbors. McHenry Sheriff's patrol cars were outside both homes Friday afternoon.

"My heart really goes out to the mom and the dad because to lose a child, I don't care how old they are, it's still your child," said Joyce Heckler, backyard neighbor.

"They both move into the same neighborhood and they can walk through yards to get to each other yards," Positeri said. "That's sensational to me. It says a lot of what families are now."

Detective David Hakim, a DuPage County Sheriff's employee, worked on the task force alongside Keltner. Hakim was not on the Rockford assignment, but he did help chase down the suspected shooter. Hakim said Keltner would always talk about his family first.

"Jake loved his family. He loved his job. He loved life," said Hakim, adding that all those on the task force understand the inherent risk associated with their jobs.

At the McHenry County Sheriff's Office, flags fly at half-staff, and badges are covered in black bands. It's an emotional loss for the department and in Crystal Lake for family, friends and neighbors.
"I'm sad for everyone," Positeri said, "for everyone in the neighborhood because everybody has lost something, and his family has lost the most for sure."

A community is mourning a local officer assigned to the U.S. Marshals Fugitive Task Force who was shot and killed at a hotel in Rockford while trying to arrest a fugitive for a par

Floyd Brown, 39, was taken into custody Thursday afternoon following a high-speed chase and hours-long standoff between him and police in central Illinois.

Investigators said Brown shot Keltner outside a Rockford hotel Thursday morning, then escaped, leading police on a pursuit of about 170 miles. Keltner was taken to local hospital in critical condition where he later died.

Police arrested Brown after a long standoff in central Illinois near Lincoln. He was taken to a local hospital to treat a broken arm and broken leg he sustained during his escape. The Winnebago County State's Attorney has filed first degree murder charges against him, and the US District Attorney for Northern Illinois filed federal murder charges against him as well. The federal charges carry the possibility of the death penalty.

According to court documents, Brown's 25-year-old girlfriend was in the hotel room at the time the task force was attempting to serve a warrant. The indictment said officers identified themselves after knocking on the door of Room 305 of the Extended Stay America and heard a male voice say "Don't do it." Officers then opened the door with a key, but the swing lock was still engaged.

Brown's girlfriend came to the door and said she wanted out, the documents said. Police then said they heard a male voice yell from inside the room and gunfire started to come through the hotel door.


Brown fled the hotel room by jumping from the third-story window and shot Deputy Keltner in the head in the parking lot as he fled.

Brown turned onto I-39 and took state troopers on a wild high speed chase with his rifle pointed out of his window.

The pursuit ended when troopers hit Brown's car, which crashed into a ditch off of I-55 between Bloomington and Springfield. He surrendered at around five p.m. Thursday, moments after police set off several flash bombs near his car.
Brown was wanted on warrants out of three counties.

The parole violation warrant issued by the Illinois Department of Corrections is connected to his 2018 parole for a 2011 downstate residential burglary.

Illinois State Police said Friday morning Brown remains hospitalized downstate with a broken leg and arm. Police said he is under guard and is not expected to be released Friday.