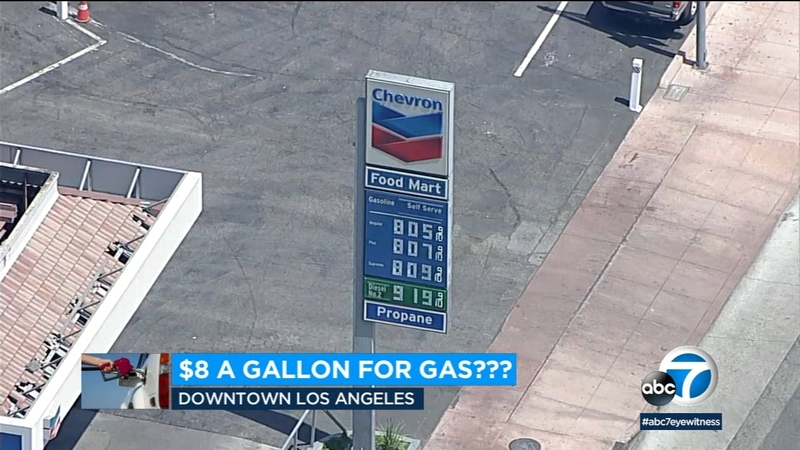 LOS ANGELES -- Gas prices have skyrocketed across the country, but nowhere are they feeling the pain at the pump more than in Los Angeles where one station posted prices above $8 per gallon Tuesday.

The Chevron station in Downtown Los Angeles priced a gallon of regular unleaded at $8.05.

In California, the average price for a gallon of gas is $6.19.

The national average for regular gasoline climbed by five cents on Wednesday to a fresh record of $4.67 a gallon, according to AAA.

That leaves gas prices up by 48 cents in the past month alone.

It now costs 32% more to fill up your tank than on the day before Russia invaded Ukraine.

Seven states now average $5 or higher, with Illinois becoming the latest to join that unpopular club, according to AAA. New York and Arizona are just pennies away from the $5 threshold.

Andy Lipow, president of Lipow Oil Associates, told CNN he expects the national average to hit $4.75 in the next 10 days.

Brent crude, the world benchmark, gained 1% on Tuesday to close at the highest level in nearly three months. Brent is up another 1.2% Wednesday morning. The gains come after Europe agreed to phase out 90% of Russian oil imports by the end of the year.

The national average for regular gas is now 44 cents higher than on the day President Joe Biden announced the largest-ever release of oil from the Strategic Petroleum Reserve in late March.