1 dead, 2 critical after car crashes into semi in Harvey 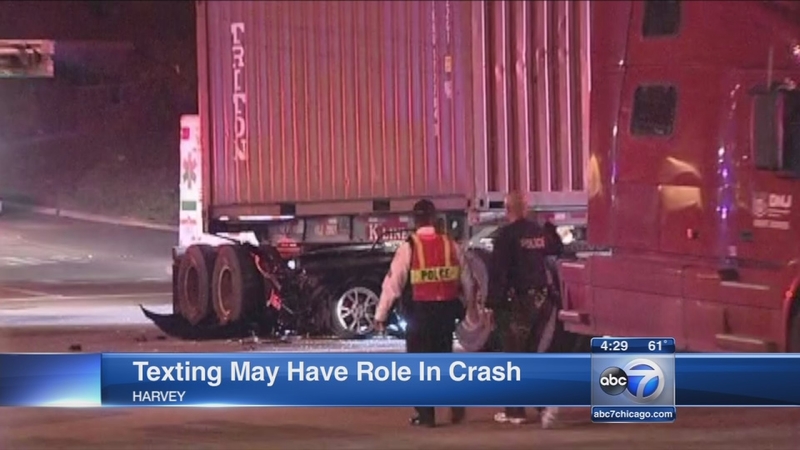 1 dead after crash in Harvey

HARVEY, Ill. (WLS) -- One man is dead and two others were critically injured in a crash in south suburban Harvey, city spokesman Sean Howard said.

A semi traveling north on West Avenue was making a legal left turn into a rail yard around 11 p.m. Wednesday when a black Nissan Maxima traveling east on 159th Street slammed into the truck and became wedged under the trailer.

There were three men in their 20s inside the car. They were all trapped.

One man is dead and two others were critically injured after their car slammed into a semi and became wedged underneath the truck in south suburban Harvey, city officials said.

The passenger in the back seat was rushed to Ingalls Hospital, but died before he got there. The Calument City man has not been identified. The other two men were taken in critical condition to Advocate Christ Medical Center and Stroger Hospital. One man is from Harvey. No further information about the victims has been released.

Investigators said speeding and texting while driving may have caused the crash. A cell phone was found on the floor on the driver's side of the vehicle.

"We found a cellphone on the floor underneath the steering wheel on the driver's side, and given the impact - there were no skid marks on the street for someone to try and stop abruptly - in some cases, texting while driving is what's going on. But obviously we can't confirm that but that is definitely a strong possibility that we're looking at," said Sean Howard, Harvey spokesperson.

Harvey officials said the speed limit along that stretch of 159th Street is 30 mph, but investigators believe the car was traveling in excess of 65 mph at the time of the crash.

Neighborhood resident Corey Chambers said he heard the impact from a quarter mile away.

"I was a couple blocks over. I just heard the impact and ran over there," Chambers said.

Officials say there is no indication that alcohol was a factor in the crash, but toxicology results are pending.

Harvey police are conducting the investigation.