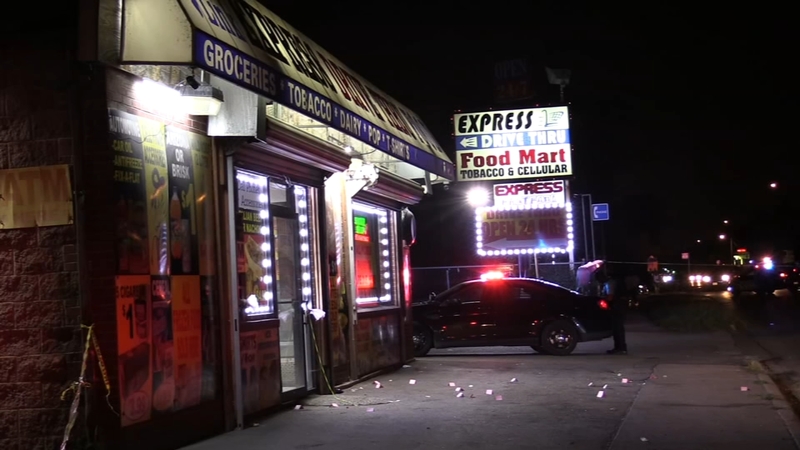 HARVEY, Ill. (WLS) -- Two people were shot and killed at a convenience store in south suburban Harvey late Tuesday. Police said their killers are on the run.

The search for the gunmen spanned all the way to Chicago Wednesday morning. Chopper 7 HD helped Illinois State Police with the search.

This is the fourth shooting to take place in the city of Harvey since Saturday. Police said the first three were connected and did not discount the possibility that this incident might also be connected.

Two men were killed and a third man was injured in the shootout. The suspects were last seen driving a black Jeep Grand Cherokee, which was briefly chased by state police into downtown Chicago. The pursuit was aborted for safety reasons near State and Randolph streets in the Loop.

Harvey police said it all started when two groups of young men exchanged gunfire near 146th and Halsted streets, after a confrontation.

"There was some kind of verbal exchange in the store. At some point the three individuals from the sidewalk tried to exit the store, but was met by gunfire from those remaining in that dark-colored vehicle. Unbeknownst to them, the one who had left the vehicle and was inside the store pulled out a gun and began firing as well," Harvey Spokesperson Sean Howard said.

The victims have been identified as 17-year-old Taijean Hall and 18-year-old Bryan Harris, who was the brother of Ryan Harris, an 11-year-old girl who was found raped and murdered in Chicago's Englewood neighborhood back in 1998.

Howard said police believe the shooting may be connected to an ongoing dispute on social media.

"We're exploring that because we had connections with three prior incidents this weekend, all related to social media exchanges. Some of the individuals involved in this don't live in Harvey," Howard said. "The sheriff is involved with this as well as our team of social media investigators here. They're going Facebook live, divulging their location, leaving themselves to be targeted by gun violence."

"I'm asking you to stalk their social media pages," said Harvey Police chief Gregory Thomas. "If your children have a name on social media, it could mean they are affiliated with a criminal entity. Inquire about it."

Hall's father Courtney said he did the best he could with his son.

"There is only so much you can do," he said. "You know, you are fighting against the environment, people, negativity. It's a struggle."

The manhunt for the two suspects continues. Howard said they should be considered armed and dangerous. Investigators said they have very good leads, including surveillance video they believe will help identify the suspects and lead to an arrest sooner rather than later.

Hall's aunt Wendi Washington had an emotional message for the suspects.