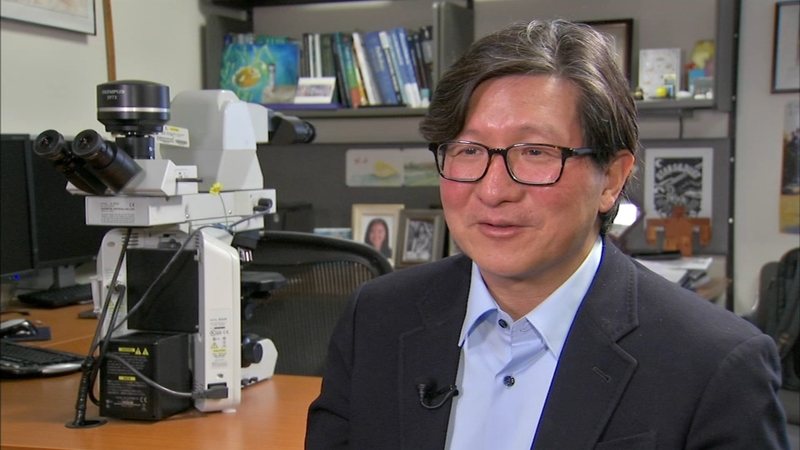 CHICAGO (WLS) -- When the COVID19 virus outbreak started in Wuhan, China, two months ago, Chicago doctor Shu-Yuan Xiao was there. Like everyone else, he was warned to get out but he decided not to flee. Instead, he chose to stay and help.

He said his decision to remain as local hospitals and clinics were being flooded with desperate patients was a life-changing event.

Xiao, a University of Chicago Medicine doctor and researcher, was in Wuhan directing a pathology center as part of an academic collaboration. Around January 10 he said cases of a mysterious viral pneumonia started piling up. It wasn't until 10 days later that they realized what was taking shape was the start of a public health emergency, the pathology professor said.

"In the very early morning on the 23rd around 2 a.m., I was woken up by a phone call from a colleague in Beijing," Dr. Xiao recalled. "She told me, because at that time there was not much activity at work either, so she said you should get out, you should leave and buy a ticket for Shanghai."

Instead, he chose to stay.

"I said this is not the time for me to leave," he said.

Then on January 24, Chinese New Year's Eve, Xiao watched a desperate plea on a social media post from a doctor working inside one of the local hospitals.

"He broke down in front of the camera. He, he was basically crying saying that he needed help, and he was overwhelmed," Xiao recalled. "Not enough protective equipment and he had been working for a long time and the patients just keep coming and coming."

Moved by that desperate message Dr. Xiao said he volunteered at one of the local clinics, which he said was in a very grave situation. The clinic was understaffed and overrun with thousands of sick, desperate patients.

When asked if he was afraid while volunteering to work with people who were possibly infected with the potentially deadly disease, he admitted it was scary but as a doctor it was something he needed to do.

"Very afraid, but we all made a choice of our career right? We don't just want to become a doctor and do the fun things and be safe all the time, so yes I was, but meanwhile not everyone got infected, and we have protect gear, we know how to protect ourselves," he said. "So I had an N95 respirator, and I had the protective suit and eye shield. I was wearing a layer of gloves. They recommend that you should wear two layers of gloves; I tried that, it didn't work. It's very difficult."

"You hope for the best, you hope you don't get infected, but you cannot guarantee," he added.

He said he knew many colleagues who got infected but did not know any of the dozens of doctors who died as a result of the novel coronavirus. Xaio believes those doctors were exposed while treating infected patients before the danger of the virus was known.

Xiao had full personal protective gear. Before returning to Chicago he was also quarantined in China until he was declared to be free of disease.

On February 18, Xaio and other Americans boarded a U.S. government charter for home; a cargo plane outfitted with several hundred seats.

He returned with renewed hope that we won't have it as bad as what he left behind.

"The situation here is much different, you have a much lower density of population and personal hygiene practices is more prevalent here," Xiao explained. "The hospital conditions here, the healthcare conditions here in the U.S., is the top of the world, so you don't have to worry."

The highly educated, successful lab researcher said he has a newfound respect for medicine in the trenches.

He described an interaction he had with a man from his hometown of Wuhan who waited in line for hours and broke down in tears when he learned a volunteer doctor from Chicago was there to help.