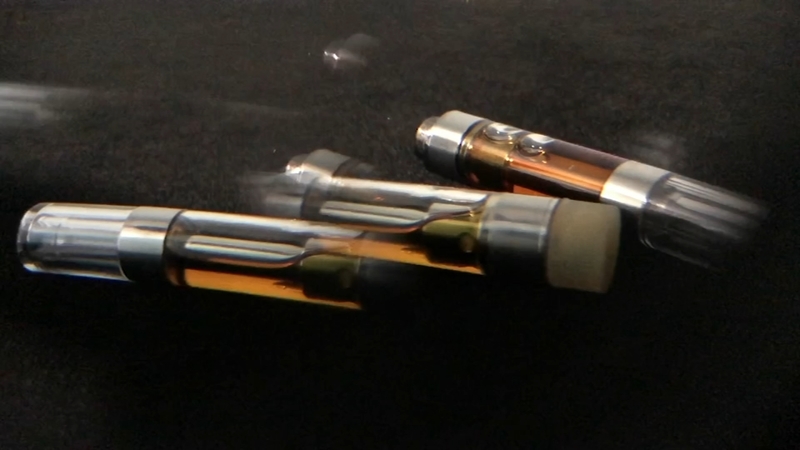 CHICAGO (WLS) -- A Chicago man who became seriously ill from vaping spoke exclusively with the ABC7 I-Team and wants to warn others.

More than 2,000 injuries and 42 deaths nationwide have been related to the vaping epidemic.

"Yeah it was within two weeks of vaping five of them that I just started to feel sick," said Matt, who did not want his face or full name to be made public because THC and marijuana are still illegal in Illinois. "Body aches, and the body aches would come after work when I would come home, they weren't consistent through the day and then gradually started getting worse."

Matt spoke to Consumer Investigator Jason Knowles to share his story as a warning for everyone.

He admitted he didn't buy his THC vape cartridges from a store. They aren't legal in Illinois until 2020. Matt had a dealer that would get the cartridges for him.

"I would be in contact with him usually over text and just say, 'Hey, I'm looking for five cartridges, when can I pick up or when can you deliver?' Often he would just drop them off right at my house, or I would meet up with him near his house," Matt explained.

He said he trusted his seller who supplied him with the cartridges until he became extremely ill.

"I was on the Azithromycin for a couple of days and I was still feeling worse, so on a Monday or Tuesday I was running a 103 fever, which was after two days of being on the prescription, so my mom is a nurse, so she said 'You should just go right in the hospital,'" said Matt. "So that was my first visit and I went to the ER."

He was treated in the ER for shortness of breath and fever. He had blood work and an X-ray taken, which showed inflammation and a possible infection of the lungs. It was noted that vaping was the primary cause. A doctor said the CT image of the lungs showed "a pattern of injury that we have seen with vaping, especially with particular cartridges such as 'Dank vape.'"

Matt said Dank Vape was one type of cartridge he used. Dank Vape can merely be packaging which dealers buy online, so you may never know what you're really getting, and many brands can be counterfeited.

"What do you want to tell people who are considering vaping THC?" Knowles asked.

The I-Team called and emailed the online Dank Vape official account, which was on the packaging that Matt provided. The I-Team did not hear back.

Matt's email correspondence with the Illinois Department of Public Health shows he reported his case and supplied officials with several of the cartridges to test. He said the Centers for Disease Control picked them up at his home.

The American Vaping Association says "adult smokers should not be afraid to use nicotine vaping to quit smoking because of the actions of drug dealers," pointing to CDC's preliminary findings, which suggest most of the problems have been traced to THC vaping.

The CDC recently said Vitamin E Acetate, which is added to THC oils, was identified as a "strong culprit." However, no one source in any cartridge has been determined. With four vaping deaths in Illinois alone, doctors say you should avoid vaping both THC and nicotine.

"Although there's a higher signal for the THC users, we definitely had people that only reported using nicotine," Dr. Ezike told the I-Team. "So it's not clear that there's a specific product that's being used that's more problematic. So, we're just warning people generally that vaping is not safe."

Doctors prescribed Matt with steroids for his lungs and antibiotics to prevent infection. His medical visits are far from over.

"I am worried about the permanent damage I've done. Just when I was in the hospital, there were multiple doctors tending to me in the future case and asking a lot of questions," he said.

Matt told the I-Team he used THC to relax and focus. He thought vaping would be "healthier" than smoking weed. He said he has stopped vaping but said he will also never smoke marijuana again either because of damage done to his lungs.