The ABC7 I-Team followed a young family who said they unknowingly lived in an apartment where their two little sons were exposed to lead for more than a year.

The Szontagh family said the landlord withheld crucial test results about lead paint in the home and now their boys will fight the effects of toxic lead for years to come.

Four-year-old Jackson and his 3-year-old brother Marshall scream as they have their blood drawn at their pediatrician's office. This is what they go through every six weeks. They have lead poisoning. Their blood test measures their lead levels, which last year were at what doctors called "dangerous levels."

The family is facing an uncertain future. Research shows lead poisoning causes changes in the developing brain that can result in permanent learning and behavior problems in children. The Center for Disease Control said, "Even low levels of lead in blood have been shown to affect IQ, ability to pay attention, and academic achievement."

"He's four years old but he has no filter, he has no off switch. He goes from total fine to a total mental breakdown over absolutely nothing," said their mother, Caitlin Szontagh. "He currently has a black eye because his brother (Marshall) punched him in the face. They fight a lot. Marshall is still eating nonfood items."

The Szontagh family believes lead poisoning is to blame for these negative changes in their boys. The amount of lead in Jackson's blood was four times the CDC's "level of concern." Marshall's was, alarmingly, nearly 12 times the "level of concern," sending him to the hospital, followed by months of in-home treatment.

In 2015, the Szontagh family rented a Berwyn apartment. Soon after moving in, Jackson was diagnosed with elevated lead in his blood. The family assumed the lead was from their previous home. Jackson's diagnosis automatically triggered the Cook County Health Department, which found lead paint throughout the Berwyn home.

"I watched the change happen before my eyes. I watched my sweet innocent little boys turn into monsters almost," Szontagh said. "It's really sad that there is almost nothing we can do but wait."

By law, the landlord was told to notify all renters about those results, but the Szontaghs said they were never told. Then the landlord, Patricia Groves, sued for eviction.

After seeing our story, Attorney General Lisa Madigan sued Groves. Once the lead was remediated, that suit was dropped.

Groves declined to talk, but in a previous statement denied liability and said, "Our investigation continues into the cause and we hope he recovers fully and quickly. ...We are cooperating fully with county health officials to ensure that the property is safe going forward."

"Really understand that children may have problems across their lifespan," explained Dr. Helen Binns, professor of pediatrics at Northwestern University and director of lead evaluation at Lurie Children's Hospital. "Be, not only evaluating, but be seeking help for your child. When you get into more complex thinking as they age and more complex social situations, well your child may have more difficulties."

According to the American Bar Association, due to "the explosion of claims and the severity of claimed damages, many insurance policies...exclude liability coverage for bodily injury or property damage caused by lead or lead paint." 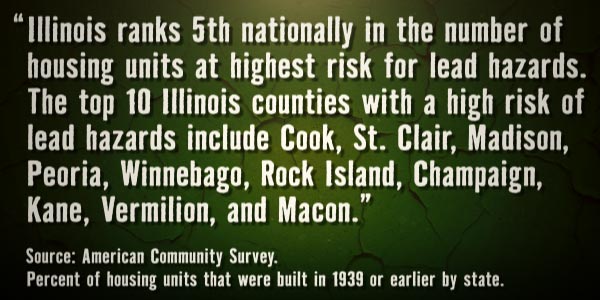 "You know, if this was a flood or a fire or something like that, homeowners insurance would cover it, but because it's lead paint there is nothing we can do," Szontagh said.

According to their attorney, the Szontaghs can only sue the landlord for the rent paid while she allegedly neglected to inform them of lead dangers in the home. The family's lawyer also said they won't be able to sue for personal injuries until the boys' issues are more defined, which could take as long as 10 years.

"People need to be aware that this is still happened," said Szontagh. "There are still homes with lead paint."

So the Szontaghs started the "Marshall Mission." Through their Facebook page, tweets and flyers, the family hopes to alert parents to the dangers of lead paint.

"Talk to your child's primary care provider and you would meet with the school," suggested Dr. Binns.

While watching her sons play, Szontagh told the I-Team, "If this can help one family from going through what we've gone through then we will be happy. The things that it can affect are endless and it's absolutely horrifying that all we can do is wait."

Dr. Helen Binns discusses the risk assessment factors for lead testing in children, even if they live in low-risk zipcodes.