Hillary Clinton in Chicago for fundraisers, meeting about gun violence 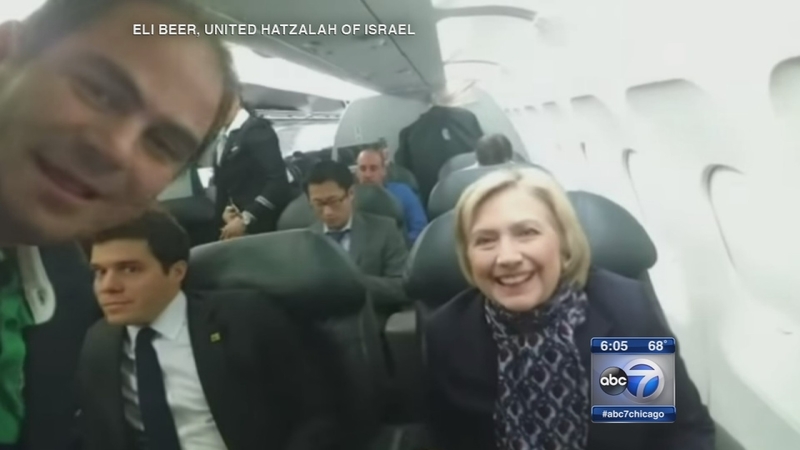 Clinton stops in Chicago for fundraisers

CHICAGO (WLS) -- Democratic presidential candidate Hillary Clinton was in Chicago on Monday for three fundraisers as well as a private meeting with more than a dozen mothers who lost children to gun violence.

The former Secretary of State flew a commercial flight from New York to Chicago Monday. A fellow passenger captured a video of Clinton, a Park Ridge, Ill., native, mingling with other passengers.

Clinton's first stop was to the Gold Coast home of Michael Polsky, the CEO of the Invenergy, an energy company, where donors lined up outside and gave $2,700 each. Energy was the subject of Clinton's first fundraiser.

"Hillary is talking clean energy in terms of economics that that is really where the jobs are," said Congresswoman Jan Schakowsky (D)-Evanston.

After the Polsky event, Clinton's motorcade headed to the Hyatt Regency Hotel for a reception with members of Chicago's legal community, where donors also paid $2,700 per person.

Clinton's third fundraiser was in Evanston.

But Clinton's Monday afternoon with a group of mothers who lost children to gun violence sought to nurture her African American support and highlight her criminal justice reform proposals.

The small, private gathering at the Sweet Maple Cafe lasted almost two hours. Clinton told the mothers that she would get back to them by Saturday about some of the ideas that they shared.

"A mother knows what it feels like to lose a child and to watch all the mothers around the table with all the pain and all the strength to fight," said Annette Holt, whose son Blair Holt was fatally shot on a CTA bus in 2007. "I think she got it, she really got it."

So far, Clinton has raised the most money of any presidential candidate; however, her supporters do not believe the nomination will be easy.

Republicans are confident that if Clinton is the democratic nominee, a republican can beat her.