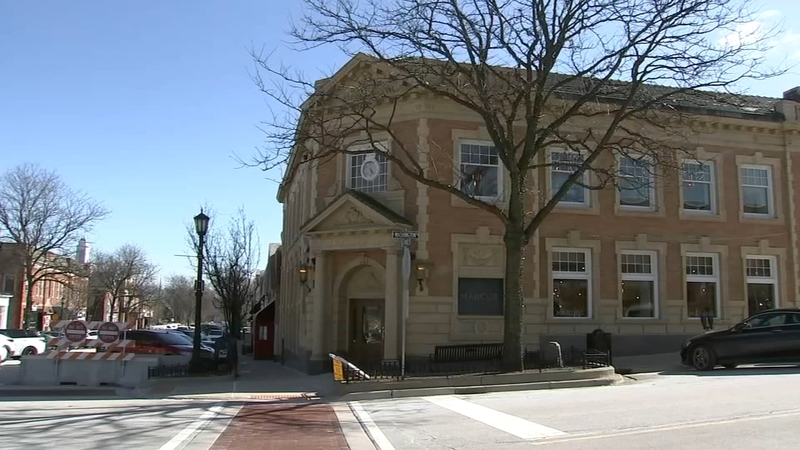 HINSDALE, Ill. (WLS) -- Businesses in Hinsdale have banded together in a show of strength in the face of retail crime. One stopped an attempted robbery, police said, before it could even start.

"It's very dangerous, I mean what if they were armed. I mean it's just crazy the way it happened. Very quick," said witness Xiomara Soto.

Soto said she saw the entire thwarted robbery attempt unfold at the Marcus store in downtown Hinsdale, just across the street from the bagel shop where she works.

"They tried to walk in but very quickly one of the girls from inside she stopped right in front of the door. And I just saw her nodding her head shaking it 'no,'" she said.

A group of men exited a white Ford Edge they had backed into an alley behind the store, according to Hinsdale police.

"They all had ski masks so you can only see their eyes," Soto said.

But a quick acting employee inside the store locked the ski mask wearing group inside the foyer, police said. A few minutes later, they left the way they came and drove off empty handed.

The rest of the block was locked down within minutes, according to J.McLaughlin store manager Andrea Kaspar.

Kaspar, who is also on the Hinsdale Chamber of Commerce Board, said after a spike in retail crime in the fall, she and other store managers created their own neighborhood watch.

"We just wanted to know what we could do to kind of protect our businesses and keep an eye out for each other. So we started this kind of group chat," she said. "Anytime we see something suspicious in town it's pretty immediate and we do notify the other stores, so that everyone can be on the lookout for things that are out of the ordinary."

Hinsdale Police Chief Brian King said when the group was unsuccessful at the Marcus in his town, they drove over to try to rob the Marcus in Deerfield, also unsuccessfully, then made their way down to the Tom Ford store in Chicago's Gold Coast neighborhood, where they were able to get away with merchandise.