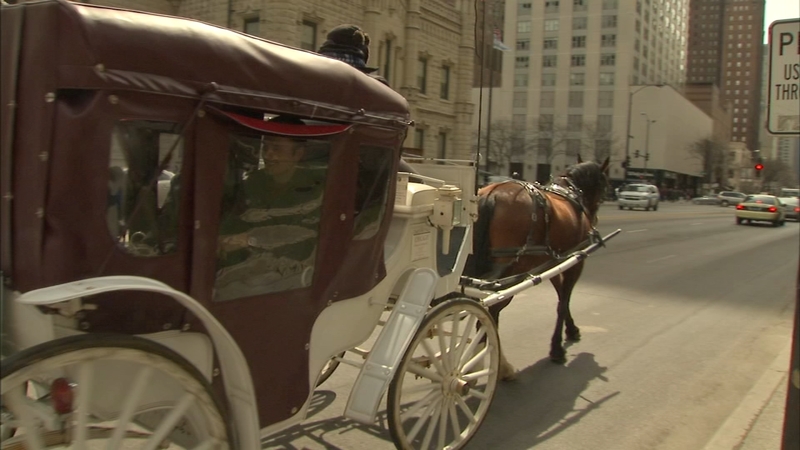 CHICAGO (WLS) -- A group of aldermen is pushing to ban horse-drawn carriages, citing safety concerns and questions about the horses' welfare.

On Wednesday, a City Council committee will consider an ordinance that would effectively end horse-drawn carriages by barring the renewal of licenses, which occurs in November.

There are already restrictions on when and where horse-drawn carriages can operate, but Aldermen Brendan Reilly (42nd Ward), Brian Hopkins (2nd Ward) and Raymond Lopez (15th Ward) are pushing the ban.

In a statement, Lopez said, in part: "Horses often times must dodge cars, bicycles and pedestrians - often times for double the time allowed by law during excessive temperatures. It is time to put an end to the industry. Chicago led with humane, progressive laws when dealing with puppy mills. Horse-carriages are no different."

"I've been doing this 33 years, and there's always somebody out there trying to get rid of us for 33 years," said Cathy McFadden, of Antique Coach and Carriage.

Antique Coach and Carriage operates 12 carriages. McFadden said their horses are well taken care of, and the horses don't work when temperatures dip below 15 degrees or above 90 degrees.

She adds that the industry is being unfairly targeted by animal rights groups.

Alderman note that one reason for the proposed ban is an increase in vehicular traffic.

"We've noticed that, too. It's a little bit like driving an obstacle course. So what we do is take streets and try to stay out of that," McFadden said.