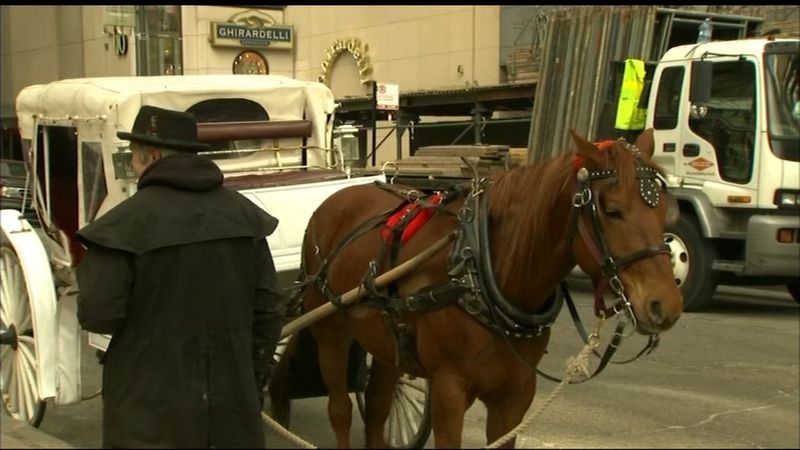 CHICAGO (WLS) -- There was emotional testimony at the Chicago City Council's Committee on License & Consumer Protection meeting on Wednesday about a proposal to ban horse-drawn carriages in the city.

The committee adjourned without voting on the issue and it was unknown when the measure might be discussed again.

Business owners and animal rights activists attended the meeting to express their positions.

Horse-drawn carriage licenses in Chicago are typically renewed in November, but a group of aldermen is pushing an ordinance that would bar horse-drawn owners from renewing their licenses, effectively putting them out of business.

There has been an effort for years to banish horse drawn carriages in Chicago.

The ordinance notes that one reason for the proposed ban is an increase in vehicular traffic.

Animal rights activists say the practice is outdated and cite concerns over the horses' welfare.

Aldermen who are proposing the ordinance said the industry received more than 300 code violations.

"I've tried routinely over the years to work with you guys to better comply with the law and be good faith actors in your industry," said Ald. Brendan Reiley (42nd Ward).

In a statement, 15th Ward Alderman Raymond Lopez said, in part, "Horses often times must dodge cars, bicycles and pedestrians - often times for double the time allowed by law during excessive temperatures. It is time to put an end to the industry. Chicago led with humane, progressive laws when dealing with puppy mills. Horse-carriages are no different."

Horse-drawn carriage operators argue that their horses are well taken care of.

"I've been doing this 33 years, and there's always somebody out there trying to get rid of us for 33 years," said Cathy McFadden of Antique Coach and Carriage. "We don't work if it's under 15 degrees or over 90."

Operators gave passion testimony on Wednesday as they face the possibility of going out of business.