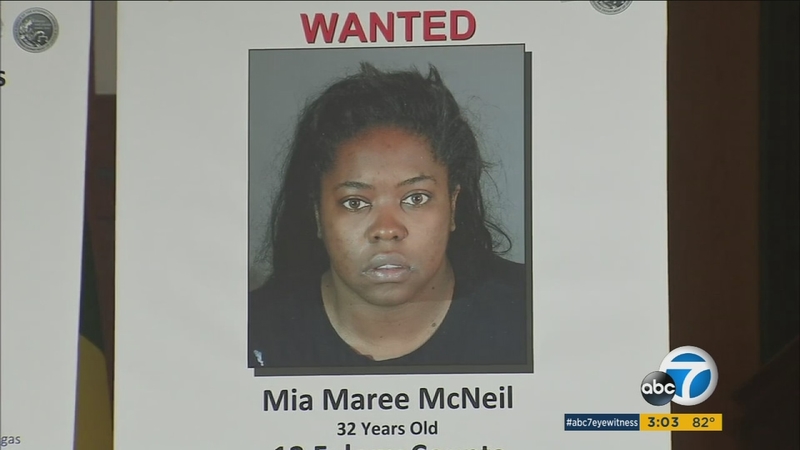 LOS ANGELES -- A human trafficking ring operating in California, Nevada and Texas was busted, and some of the victims being sold for sex were only 15 years old.

Two people were arrested in the case, and authorities are looking for one more.

"Certainly, any of these cases where we rescue young people who are being held in this form of slavery is a major case for us, a major success to be able to get them on the right track, to get them back to their family," said Los Angeles County Sheriff Jim McDonnell during a press conference.

Quinton Brown III, 30, of Highland, is charged with 41 felony counts ranging from human trafficking of minors to pimping. Gerald Lavell Turner, 32, of Fresno, is facing six similar counts. Both men are being held in a Tulare County jail.

Investigators are still looking for Mia Maree McNeil, a 32-year-old woman from Los Angeles. She's facing 12 felony counts, including identity theft. She's accused of renting apartments where the girls would have sex with customers, and she also allegedly stole IDs to lease high-end cars, including two Maseratis and a Porsche. The cars were allegedly used to take the girls from place to place up and down the state.

According to investigators, the suspects are part of a human trafficking and sex ring that pimped young girls for sex from Central and Northern California to the San Fernando Valley, Burbank and West Hollywood.

There were 13 female victims, and eight of them were juveniles, McDonnell said.

"They're as young as 15 years old, bought and sold for commercial sex," he said.

All of the victims in this case are from Central California. According to investigators, predators are able to lure young girls into the sex trade by using the internet and phone apps. Investigators say while most of the girls rescued from the sex trade come from broken homes, many do not.

The Tulare County Sheriff Mike Boudreaux had this strong warning for parents when it comes to your children's internet usage: "Be vigilant. Pay attention to what your children are doing online. Ask those very difficult questions. Who are you speaking with? Who are you talking to? Be that protective parent."
EMBED More News Videos

Seven months ago investigators found a missing Tulare County girl and Tulare County Sheriff Mike Boudreaux said was being forced to have sex for money in Los Angeles.

Seven months ago investigators found a missing Tulare County girl he said was being forced to have sex for money in Los Angeles. She was not the only one who was lured into prostitution through the internet. In this case more than a dozen victims were identified and Boudreaux believes there will be more.