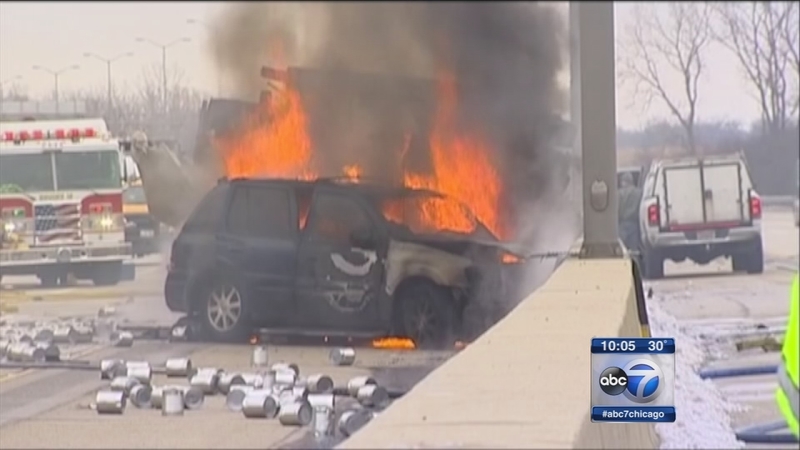 DEERFIELD, Ill. (WLS) -- A fiery crash that rolled over a semi injured three people and brought out the best in many who witnessed it.

The crash occurred around 12:53 p.m. Thursday near mile marker 23.4 when police say a Buick SUV lost control, crossing in front of the semi-truck, causing it to hit the driver's side of the Buick. The Buick and truck then struck the concrete median, causing the truck to roll over onto its side and catch fire. A BMW was also struck by the semi-truck during the crash, police said.

Three people, including a 57-year-old female passenger of the truck, were hospitalized with non-life-threatening injuries.

"There was one individual in the SUV and we helped him get out of the vehicle," said Tom Hoover, who helped rescue one of the drivers. "He was unconscious when we pulled him out, we hope he's alright."

"I wasn't there to see it but if he was pulling someone to safety I would say you're in the right spot at the right time, job well done. We appreciate your efforts, can't thank you enough," said Ray Larson, Deerfield-Bannockburn Fire Department.

"Everything was on fire and they had already pulled the victim out, they were doing a wonderful job of doing that too," he said.

Fahrenbach said a woman also blocked traffic with her car, a critical move that cleared a path for arriving fire fighters.

"It was, 'this is where I'm at, this is what I'm presented with, this is how we're going to help,' and everyone worked like clockwork," he said.

The moment moved him, and he has a message for the strangers he met, regretting not getting all their names.

"If you're watching, I want to thank you very much for what you did, you were amazing," says Fahrenbach. "Thank you."