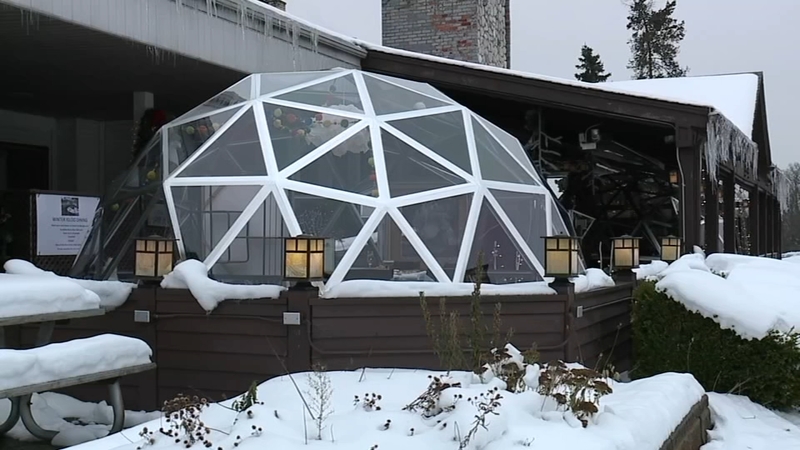 TROY, Mich. -- During the cold, it's nice to dine at a cozy restaurant, especially one with a fireplace, but if you long to be cozy outdoors, one Michigan restaurant offers seating options inside of heated igloos.

"Here's our one chance to cheat Mother Nature," said Vic Dzenowagis, the owner of Camp Ticonderoga.

The restaurant is debuting two heated igloos for the season. Each one seats a party of ten with a $200 minimum, WXYZ reported.

"Go to any restaurant. How are you going to get a table for 10, where it's just your party," Dzenowagis said.

Dzenowagis also owns Deadwood Bar & Grill in Northville. They first tried out the trend last year, and turns out it was a hit.

"We called the guy that makes these and said we are ordering four more," Dzenowagis said.

Dzenowagis said the igloos he has are carpeted, well insulated and cost around $8,000 each.

"But that pays for itself in a week," he said.

The igloos will also accommodate your personal music, adding to the experience.

"Who likes to be cooped up inside? I know I don't. It's a good excuse and a comfortable way to be outside," Dzenowagis said.
Report a correction or typo
Related topics:
businessmichiganbusinessrestaurant
TOP STORIES
Meat Loaf, 'Bat Out of Hell' rock superstar, dies at 74
Some IL lawmakers seek to repeal recently-passed criminal justice bill
Man shot by U of C police officer called 911, said he was armed: court
Man, 57, killed in Edison Park hit-and-run: CPD
American Airlines flight turned around over maskless passenger
Rittenhouse asks for gun seized during arrest to be returned
IL locations of the Center for COVID Control to remain closed
Show More
Illinois reports 23,246 new COVID cases, 198 deaths
Reporter hit by car on live television, but continued reporting
How Chicago police use ShotSpotter technology to help fight crime
Chicago Weather: Sunny, cold Friday
McConnell: Black people vote at similar rates to 'Americans'
More TOP STORIES News