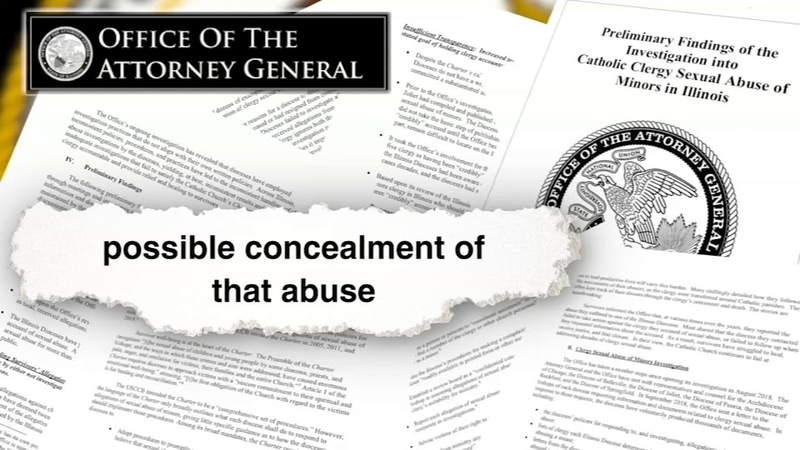 A stunning new report on sexual abuse by priests in Illinois has determined that Catholic Church officials knowingly withheld from the public the names of at least 500 clergymen accused of misconduct.

Preliminary findings of an ongoing investigation by Illinois Attorney General Lisa Madigan released Wednesday are the most scathing assessment yet of how the state's six Roman Catholic dioceses have handled sexual abuse allegations against priests and other clergy.

Madigan's highly critical report states that the Church has "failed in its moral obligation to provide survivors, parishioners and the public a complete and accurate accounting of all sexually inappropriate behavior involving priests in Illinois." The attorney general's statement comes even as Catholic Church officials have touted their renewed transparency and freshly updated lists of priests credibly accused of sexual misconduct.

Madigan's preliminary report found that Illinois' six Roman Catholic dioceses "often disregarded allegations by not investigating the allegations, or finding reasons not to substantiate the allegations." The Attorney General's investigators wrote that the "dioceses also often found reasons to discredit survivors' stories of abuse by focusing on the survivors' personal lives" and that "based upon its review, the Office believes that additional allegations" of clergy sexual abuse "should be deemed 'credible' or 'substantiated' by the Illinois Dioceses."

The investigation also uncovered "multiple examples where the Illinois Dioceses failed to notify law enforcement or DCFS of allegations they received related to clergy sexual abuse against of minors."

Click here for a copy of Madigan's status report.

Madigan's harsh assessment of their transparency paints a far different picture of Church openness and suggests that the public was not informed of hundreds of potentially dangerous predators.

The state investigation began in August following the release of a Pennsylvania grand jury report describing the scope of clergy child sexual abuse in that state. Some of the Pennsylvania clergymen implicated there had connections to Illinois dioceses.

According to a statement Wednesday afternoon by Madigan, "the findings also provide a critical document for discussion as the U.S. Conference of Catholic Bishops plan to meet for a week-long retreat in Mundelein in January."

A man who says he was molested in the 1980s by an order priest on the Southwest Side said Madigan's report is a vindication.

For Ken Kaczmarz of La Grange Park, the report is vindication.

"People can no longer say this is just angry lawyers and angry survivors. They now have to say this is the truth," he said.

Kaczmarz said he was molested in the 1980s by an order priest on the Southwest Side. He said Madigan's report reveals what he's believed for years.

"The Archdiocese of Chicago, every diocese in Illinois, are a bunch of liars," said Kaczmarz.

Archdiocese of Chicago officials said in a statement that since 2002 they have reported all allegations of child sex abuse to civil authorities, including all historical allegations.

"The depth of the cover-up, I think, is what's shocking. And the fact that it's continued is disappointing but not shocking," said Zach Hiner, executive director of Survivors Network of Those Abused by Priests.

Chicago Cardinal Blase Cupich released this statement in response to the report:

"I want to express again the profound regret of the whole church for our failures to address the scourge of clerical sexual abuse. It is the courage of victim-survivors that has shed purifying light on this dark chapter in church history. Their bravery spurred my predecessor Cardinal Joseph Bernardin to establish an archdiocesan Special Commission in 1991 to examine this terrible crisis, and to develop a robust set of procedures to protect young people from predators and to establish supportive services for victim-survivors and their families. Those efforts continue today in the Archdiocese of Chicago's Office for the Protection of Children and Youth, which is staffed by lay professionals with backgrounds in investigative services, education, social work, and therapeutic services. They work daily to protect and heal. There can be no doubt about the constant need to strengthen our culture of healing, protection, and accountability. While the vast majority of abuses took place decades ago, many victim-survivors continue to live with this unimaginable pain."

Archdiocese officials say they've reviewed the preliminary report and the "nature of the report makes it difficult to discern which generalized findings apply to the Archdiocese of Chicago."

Their statement continues in part:
"-First and most important, we recognize and mourn the grave damage done to the many people harmed by clergy sexual abuse. We will always need to own and express deep regret for the suffering caused both by the abuse and the past failures to respond.

-Recognizing the need to help heal this harm, since 1991 we have maintained one of the first and largest victim-assistance programs in the nation. The assistance ministry and the help it offers is independent of the investigative process. We provide this assistance to anyone making an allegation regardless of when the abuse is alleged to have occurred, whether the accused is living or whether the allegation is eventually substantiated. To date, we have provided assistance to more than 400 victim-survivors and their families. We ask that anyone who has been abused by a member of clergy or employee of the archdiocese to come forward to receive the help and healing they deserve.

-The Archdiocese of Chicago has been at the forefront of dealing with the issue of clergy sexual abuse for nearly three decades. In 1991, Cardinal Bernardin called for a dramatic change in our culture, and in 1992 the Archdiocese of Chicago established a hotline for reporting abuse and adopted policies and procedures for the safeguarding of children, which ultimately served as the model for the Charter adopted by the U.S. Catholic bishops a decade later.

-We investigate every allegation against an archdiocesan priest we receive, regardless of whether the accused is alive or dead.

-When an allegation of child sexual abuse involves a religious order priest, we remove the accused's faculties to minister in the archdiocese, contact the religious order and help facilitate the victim's report. Each religious order is mandated to have a process for investigating such allegations.

-Since 2006, we have published the names of diocesan priests with substantiated allegations of abuse, and in 2014 we released more than 20,000 documents from these priests' files.

-When we learn of an allegation of abuse we act promptly, report it to civil authorities, remove the accused from ministry and investigate the allegation. Allegations are submitted to our lay-majority independent review board for investigation. To date this board has conducted 255 recorded meetings.

-Sexual abuse of children is a problem across society. Therefore, we conduct background screenings for archdiocesan employees and volunteers, along with a comprehensive safe-environment training program for adults and children. Last year alone, we trained 112,000 children in an age-appropriate manner on how to how to recognize, resist and report abusive behavior. To date we have trained more than 263,000 adults in 3,700 training sessions.

-We have subjected our processes, policies and files to the review of multiple independent experts multiple times to help ensure we remain accountable and current in dealing with this issue.

-We stand ready to cooperate with all institutions and agencies that care for children and will share our experience and learnings. No matter where a child is educated or cared for, they are all our children and deserve to be protected."

The statement also said the Diocese of Joliet said they are committed to working with state and local law enforcement on the matter.

The Diocese of Springfield said in a statement: "The Attorney General's inquiry has prompted us to comb through decades' old paper files, reviewing cases that involve clergy and lay people most of us have never met, and many of whom are deceased" said Bishop Thomas John Paprocki. "Revisiting the pain caused to victims of abuse has motivated us to redouble our commitments to the reforms undertaken many years ago and to sustain our vigilance."

Officials from the Dioceses of Rockford and downstate Belleville did not respond to I-Team requests for comment.