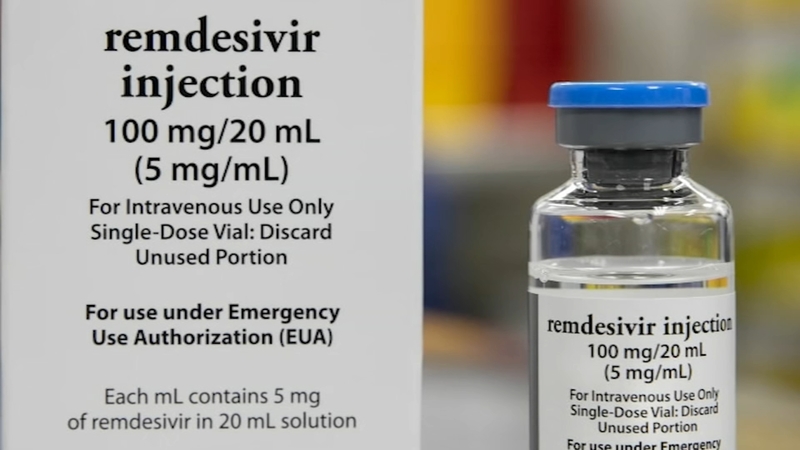 CHICAGO (WLS) -- Illinois public health officials have received a sizable second shipment of the antiviral drug Remdesivir, more than double what the federal government sent earlier in May.

Remdesivir has shown promise as a treatment for COVID-19, and nearly 30 percent of this shipment is coming to the Chicago region to provide treatment for more than 1,500 hospitalized coronavirus patients.

Glass took to Facebook on April 8 to describe her battle with COVID-19.

"My decision was I didn't want to be intubated," she said in that video. "Even though I felt like death and at times I thought I was gonna die, that I had a daughter I had to get back to, and a son."

Even for this outgoing and straight-talking Chicagoan, reliving the trauma of the virus can be overwhelming.

"It was the-- very scary," she said through tears in her Facebook message, "and so I am telling you, please take this very seriously."

About six weeks later the 48-year-old mother of two is back home in Chicago's Pilsen neighborhood with her family, virus-free and thankful she had the opportunity to agree to be treated with Remdesivir, which was being offered through a research trial.

"And I can say that, immediately, as soon as we tried the Remdesivir, it was, like, immediate relief to my lungs," she said. "And I felt really good for about two hours and then I slowly started to feel ill again. And I figured, you know, of course it's got to work its way out."

Glass was taken to University of Illinois hospital by ambulance on March 30, only after she had dragged herself into a clinic to get tested for what she initially thought was just a flu.

"It's a really dark virus," Glass said. "I remember having nightmares before I went into the hospital, just wanting to give up because it just took everything out of me to breathe, to walk, to move, to answer."

Hospitalized and on the verge of being placed on a ventilator, Glass agreed to the drug trial.

"Once a day-- so the first treatment was, I believe, an hour long and then it went down to half an hour, anywhere between half an hour and 40 minutes every day after that. And I took the treatment for six days," she described.

Following the drug trial, Glass was out of the hospital in a little more than a week.

Dr. Richard Novak, lead investigator of Remdesivir for UIC and Glass's physician, said for the right hospitalized patients the infused medication can lessen the severity of COVID-19.

"It has a modest benefit, and that's why we're doing more studies, we're trying to improve on that," he said.

Remdesivir is not considered a knock-out treatment on its own, and it isn't a cure. But initial results do show it has helped some people recover faster, which led to the drug's emergency use authorization by the Food and Drug Administration.

The antiviral medical is manufactured by Gilead Sciences. It decreases the amount of COVID-19 in the body by slowing or stopping the virus from replicating.

"On death rates, for people who got the drug had a trend toward lower incidence with dying from COVID-19, and any effect like that is, of course, significant," Novak said.

"Had I not taken the drug I think I would have been there at least another week," said Glass. "I wanted to survive this and I was going to fight it. And I kept thinking I had a family to go home to."

Glass's husband Michael was the only other person in her immediate family who tested positive for the virus. He never showed any symptoms, despite being at higher risk because he is diabetic and because he received a kidney in 2010 at UIC.

Glass said her husband realized the room she was treated in at UIC was the same one he stayed in right before his transplant. That surprise discovery brought her peace and a sense she would be OK, she said.

"Every day I think to myself, I'm one of those millions and I made it," she said. "It makes me more aware of the kindness and generosity of doctors and nurses, and how much they sacrifice for all of us."

Late last week researchers finally published details on the first major Remdesivir trial. They found on average patients who receive the infused mediation healed faster, and left the hospital in 11 days versus 15.