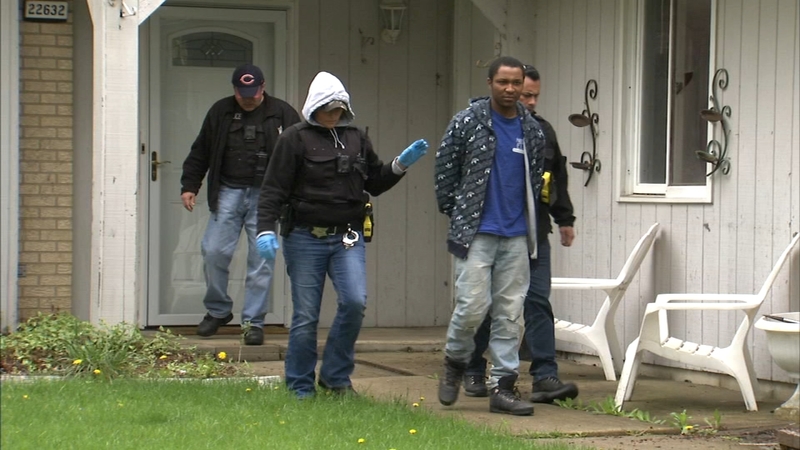 In Illinois it takes a state gun card to legally buy or possess a firearm. But there were more than 10,000 Firearm Owner Identification (FOID) cards revoked in 2018 alone because of criminal charges, orders of protection or expiration.

According to the Illinois State Police 75% of those FOID cards were unaccounted for in 2018.

The I-Team rode along with the "gun rustlers," officially known as the Gun Suppression Team, Cook County's specialized force of sheriff's police tasked with tracking down unlawful gun owners. What that takes is making a house-call: knocking on doors and talking to the owners.

Over several hours there were six stops: two in Harvey and one each in Riverdale, Blue Island, Bridgeview and Richton Park. Tomorrow, there will be other locations.

The team travels in unmarked vehicles armed with FOID revocation notices from the Illinois State Police.

ISP runs the Firearms Owner Identification system but when a FOID card is revoked, currently ISP does not typically go to homes to confiscate the cards or the guns. Owners not in compliance are notified by mail. as are local police departments.

The ABC7 I-Team rode along with law enforcement teams dedicated to taking firearms from gun owners whose FOID cards have been revoked.

Illinois is one of just three states requiring gun owners to have a license to own firearms and buy ammunition.

How does someone typically end up on the Gun Suppression Team's list?

"There is there are several ways that it can happen; a felony, an order of protection, domestic, mental health condition," said Sargent Chris Imhof.

An expired card or change of address can also trigger a revocation.

"Once you explain it to them what the procedures are everybody mostly wants to be compliant and get their stuff back in order," said Imhof.

The I-Team spent several hours with the police as they checked up on residents in the south suburbs.

"We're going to try to get the card and an Illinois firearms disposition form, which would show where firearms if they had any are. So then the state can see and they put in a record," Imhof said.

Police bodycams record the encounters; the guns are taken from revoked FOID holders, usually without any problems.

But still, they treat each visit with caution.

"Well, there's always danger in anything that we do. Right now we do know what we are going into that's at least the person has a- might have a firearm," Imhof said.

The Illinois FOID set-up has long been characterized by critics as broken and full of loopholes, lacking an enforcement provision and instead relying on the honor system.

"Literally we have the most ridiculously, disastrous foolish system you can imagine," he said.

"Here's something everybody knows, these people on this list have guns and they're not supposed to have them and no one is going to the door to get them," said Dart.

The gun used in a Kane County workplace attack last February had fallen through the cracks. An employee with a revoked FOID card killed five of his co-workers and wounded five Aurora Police officers armed with a .40 caliber pistol gun he shouldn't have had.

Still being debated is whether these retrievals result in a safer communities.

"It's every gun owners dream or most of them in the state of Illinois to repeal the FOID card," said Richard Pearson with the Illinois State Rifle Association.

"All the things they are trying to do to the FOID card holders is only trying to make it harder on law abiding citizen's; it really doesn't do for the criminal or to the criminal," he added.

But the I-Team learned that additional law enforcement agencies in Metro Chicago are now joining the FOID fight with certified letters to revoked owners and with in-person checks, some cases in Lake County dating to 2016.

"In the previous administration things were put into files and nothing was taking place. And I decided that under my administration we need to make our community safe," he said.

Lake County now assigns a detective to do in-persons checks when a revocation notice comes in to the department.

"We just show up at the door and we say 'Hi, how you doing? I'm so and so at the Lake County Sheriff's Department, we received this notification from ISP regarding your FOID card being revoked or suspended and we ask them 'Do you have your card?' and people have been compliant and they've given us the card. We also ask them about whether they have any weapons and we have been very fortunate people have been compliant with our request," Idleburg said.

Most visits are without a warrant, so police can't just barge in and search.

Imhof said there are times they do run across people wanted for other things and they are taken into custody.

While the I-Team was along, police had a warrant for Skylar Jenkins. He was wanted in Park Forest for felony forgery, which triggered the FOID revocation and his arrest.

When asked if he could explain what happened to his gun, Jenkins said he did not know what this was about.

Police said Jenkins claimed he threw his gun in the garbage, then later said it had been stolen. Changing his story actually cost him $1,000. That is the fine for not reporting a stolen gun.

He's due back in court next week.