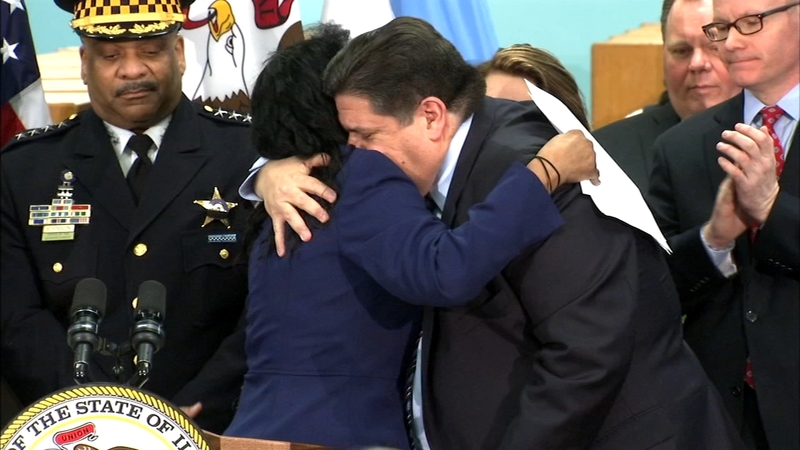 Governor Pritzker, flanked by Mayor Rahm Emanuel and Chicago Police Superintendent Eddie Johnson signed the gun dealer licensing bill into law at a school on the city's West Side. SB 337, a bipartisan plan to combat illegal gun trafficking, requires firearm dealers to be licensed by Illinois State Police instead of the state agency that regulates professions and occupations.

In addition to requiring gun shops large and small to obtain the $1,500 state license, it will also require them to install video surveillance, and train employees to recognize those who try to make straw purchases where someone buys a gun for someone who can't legally own one.

"Today is a long overdue step to do more to prevent gun violence, to make sure that guns don't fall into the wrong hands," Governor Pritzker said.

"You don't need a PhD from Harvard that if you are going to regulate a barbershop and a bar, maybe you should also regulate a gun dealer," said Mayor Rahm Emanuel.

The signing ceremony was attended by a mother who lost her daughter and son to gun violence 20 years apart.

"Thank you for allowing me to honor my daughter Tyesa's memory with action on her anniversary of her becoming an angel," Delphine Cherry said. "I know she's looking down smiling at all of us, and said 'We did it.'"

"While no law will stop all gun violence, or bring back Tyesa or Tyler this law will save lives," Cherry added, "If we can save even one life it can save one life from being taken by illegal guns, then we have made progress."

Pritzker also spoke about other gun measures he wants to take action on, including a bump stock bill. He said an assault weapon ban will probably have to wait until next year.

Supporters of the bill said federal regulators are stretched too thin, but opponents say the new licensing is expensive, and could force small dealers out of business.

The director of operations at On Target gun shop in Crystal Lake said they are already doing what the law will now mandate.

"It's not just the straw sales that are producing the guns that are killing people, it's illegal stolen guns from other states that are brought up to Illinois. So why take it out on us?" said Tom Dorsch.

For the bill's sponsor, it was a victory 16 years in the making.

"I can't even imagine how many kids we've lost in the last 16 years because of political dithering over whether or not we should do this," said State Senator Don Harmon (D-Oak Park).

Former Governor Bruce Rauner vetoed a similar measure last year. The Democrat-controlled legislature approved a new version, but held onto it until Pritzker was in office.

The bill was approved in the aftermath of the school shooting in Parkland, Florida, and the killing of Chicago Police Commander Paul Bauer.

But police know this bill alone won't prevent criminals from getting their hands on illegal guns.

"I'm sure at some point they'll try to figure out other ways to get around this and then we just have to be savvy enough to close those loopholes also," Supt. Johnson said.

The Illinois Rifle Association released a statement Thursday saying, "The state licenses for gun dealers measure was passed in the previous General Assembly but was never sent to Governor Rauner because 2nd Amendment rights opponents knew he would veto it. Political gamesmanship like this is just a typical day in Illinois politics. The Illinois State Rifle Association is deeply disappointed in the action taken today, but is certainly not surprised.

The federal government already licenses gun dealers. There is no need to add yet another layer of bureaucracy on gun dealers. The only thing this measure is going to do is make it cost more money for gun dealers to do business in Illinois, which is going to hurt the smaller dealers.
The action taken today is another assault on our 2nd Amendment rights.

Nothing in this bill is going to enhance public safety in Illinois.

The only thing that is being accomplished here is the creation of a bureaucratic nightmare for gun dealers. Rest assured, we will be challenging this new law in court."


Former Congresswoman and gun control advocate Gabrielle Giffords released a statement supporting the new law saying, "Illinois finally has a Governor who understands that gun violence is a public safety threat that requires action - not silence," said former Congresswoman Gabrielle Giffords, co-founder of Giffords. "I am proud of the Illinois legislature and Governor Pritzker for working together to respond to demands from Illinois families. Together, they are taking action to curb gun trafficking and make communities safer places to live, work and play. Governor Pritzker is beginning his tenure by making it clear that saving lives from the country's gun violence epidemic will be a defining issue for his administration. We look forward to working with him and the rest of Illinois's leaders on additional initiatives to build a bridge to a safer future in Illinois."
Report a correction or typo
Related topics:
politicsspringfieldchicagoaustinillinoisjb pritzkergun controllawsgun lawsguns
Copyright © 2022 WLS-TV. All Rights Reserved.
TOP STORIES
ISP trooper, wife ID'd after found dead inside parked car: police
Wind Chill Advisory issued overnight in some suburbs | Live Radar
Cause of death revealed for 23-year-old woman found dead after date
Girl, 8, killed in shooting caught in gang crossfire, police say
Highland Park city council extends proof of vaccination mandate
Family continues to seek new leads in unsolved Naperville murder
Dad charged and fired from job after racist tirade posted on TikTok
Show More
Family of hospitalized 7-year-old girl encourages COVID-19 vaccination
34 state prisons on COVID lockdown as cases soar
Chicago Weather: Very chill Tuesday
What to know about stock market's recent ups and downs
Illinois reports 9,462 new COVID cases, 81 deaths
More TOP STORIES News