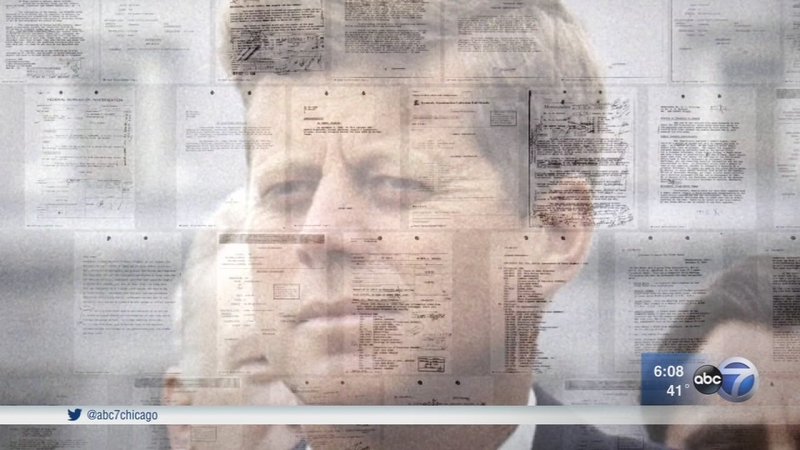 CHICAGO (WLS) -- The declassified John F. Kennedy assassination files are a window to how American law enforcement focused on shadowy Chicago Outfit figures and other Chicagoans who they thought might have had a role in the killing of the president.

Tens of thousands of pages from law enforcement reports, intelligence filings, transcripts, memos and notes are sprinkled with references to Chicago hoodlums, suspected communist sympathizers in Chicago and business operators in the city.

There are also reports detailing possible connections that JFK assassin Lee Harvey Oswald had in Chicago and links that Oswald-killer Jack Ruby had here.

Twice in 1975 Roselli testified before the U.S. Senate Select Committee on Intelligence about CIA plans to kill Castro. It was known as Operation Mongoose.

Shortly before Roselli testified, a still unknown person shot and killed Giancana as he cooked up sausage and peppers in the basement of his Oak Park home. That gangland murder happened in June 1975, just days before Giancana was to testify before the committee. Giancana's murder supposedly prompted Roselli to permanently leave Los Angeles and Las Vegas for Miami, Florida.

Roselli then went missing in July, just before his next committee date.

The next month the hoodlum's decomposing body was found in a 55-gallon steel fuel drum floating in a bay near Miami. Federal investigators suggested he may have been killed by Chicago mobsters for keeping an unfair share of the mob's gambling interests in Las Vegas However U.S. Attorney General Edward Levi instructed the FBI to find out if Roselli's earlier testimony regarding the CIA plot to assassinate Castro may have led to his murder.

Roselli had told associates that individuals he had recruited to kill Castro had been turned by the Cuban leader to assassinate President Kennedy.

About 300 of a total 3,100 documents were ordered withheld by President Donald Trump at the request of national security officials. Those files are being subject to a 6-month re-review process. Some of the documents that were released have redactions.

Federal agents were deployed around the world to run down leads in the JFK hit, according the voluminous records released by the National Archives. FBI reports reveal that distant Chicago acquaintances of JFK killer Lee Harvey Oswald and Oswald's killer Jack Ruby were quizzed by agents.

Newly declassified records raise questions about whether U.S. intelligence officials dropped the ball in tracking Oswald during the weeks leading up to Nov. 22, 1963-that fateful day in Dallas when he fired from a sniper's perch in the Book Depository building and killed the president.

Reports show that Oswald visited the Soviet Embassy in Mexico City less than two months before the fatal attack on JFK. According to the FBI, Oswald met with Valeriy Vladimirovich Kostikov, a senior KGB agent who was known to have worked for the Soviet's "13th department" - which was responsible for assassinations.