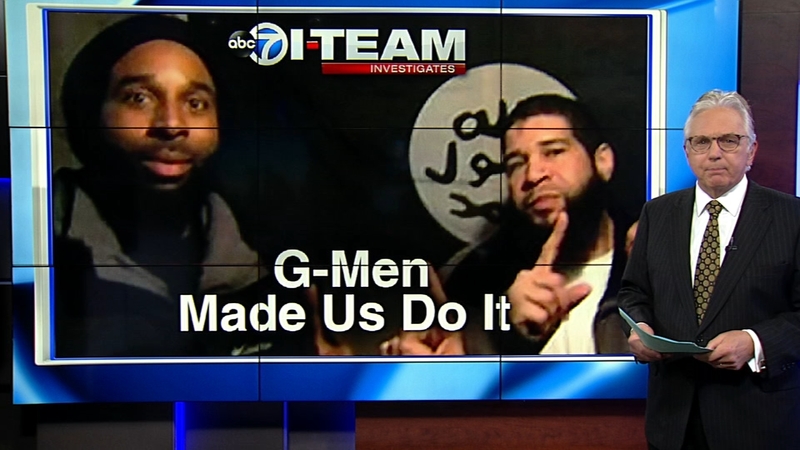 Two years after their arrest on federal terrorism charges and now two weeks before trial, two Zion men are claiming that the government entrapped them into committing crimes.

Joseph D. "Yusuf Abdulhaqq" Jones and Edward "Abdul Wali" Schimenti were charged in April 2017 with conspiring to support ISIS and plotting an attack on the Great Lakes Naval Base.

They are scheduled to go on trial May 28 in Chicago but, in newly filed court records obtained by the ABC7 I-Team, the men are firing back at the FBI claiming they were entrapped in a scheme engineered by federal agents.

Jones and Schimenti, both 37, had been under surveillance by the FBI for two years, according to their court documents.

"During that entire time, neither Mr. Schimenti nor Mr. Jones ever expressed a willingness to conduct any violence," the pair's attorneys said.

The talk of attacks and overt support for ISIS "only started once prompted by government agents," they maintain. "It is extremely unlikely Mr. Schimenti or Mr. Jones would have committed the instant offense without government inducement."

Their attorneys are asking that jurors be instructed on what entrapment is, following what is expected to be a robust defense case focused on how undercover operatives reeled in the friends.

Prosecutors have stated that "the government did not induce defendants Jones and Schimenti to commit any crime." They call it a "non-existent entrapment defense."

Attorneys for the two north suburban men declined to comment on apparent defense plans to argue entrapment, but both attorneys said they do expect trial to begin two weeks from Tuesday.

We have seen very similar investigative tactics in the case of Adel Daoud -- who was sentenced last week to 16 years in prison after an FBI sting operation -- and similar criticism from Daoud's attorney that the terror plot was ginned up by the government.

As the I-Team first reported in 2017, Schimenti was "gathering the courage to launch some sort of attack at Naval Station Great Lakes," according to FBI agent Cassandra B. Carnright.

In the newly filed court document, defense attorneys state that "It is not as if Mr. Schimenti or Mr. Jones had the independent means to commit this act. They have no special training, do not know anyone affiliated with any FTO (Foreign Terrorist Organization), and most importantly, had no experience of political violence outside of vicariously watching foreign videos posted by unknowns on the internet."

An original criminal complaint against the men included numerous photographs. Among the pictures in the complaint are ones apparently taken at the Illinois Beach State Park on the Lake Michigan shoreline in Zion. They purport to depict Jones and Schimenti holding ISIS flags. Schimenti is heard on FBI undercover tape saying he would like to see the ISIS flag "on top of the White House," investigators said.