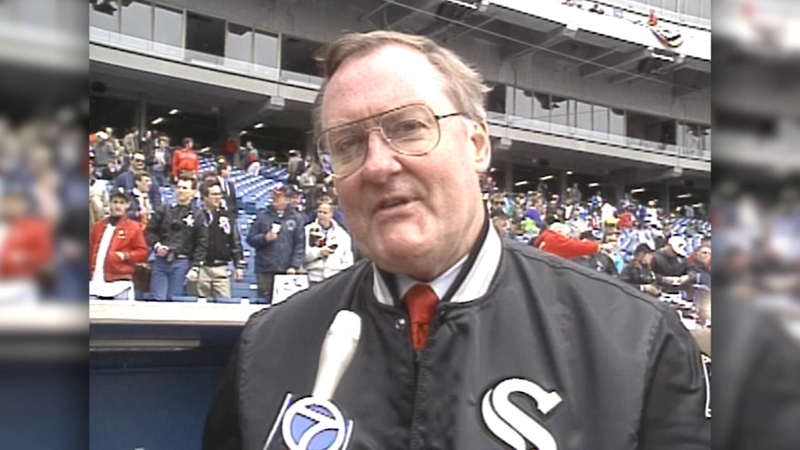 His family told ABC 7 Chicago he was going through rehabilitation at Shirley Ryan Ability Lab in Streeterville when he suddenly was stricken and died Friday evening at age 84.

The Republican was Illinois' longest-serving governor and has been dubbed a "titan" in the history of state government.

Affectionately known as "Big Jim," the native Chicagoan was elected for four consecutive terms and served from 1977 to 1991.

Thompson notably helped keep the White Sox Chicago's South Side team, instead of moving to Florida, by building a new stadium

He also led the state through a recession.

Prior to becoming governor, he worked in the Cook County state's attorney's office and was appointed by President Richard Nixon to serve as U.S. attorney for the Northern District of Illinois.

As a federal prosecutor, Thompson worked to convict former Illinois Gov. Otto Kerner. And after serving the post himself, Thompson tried to keep his friend and former republican Gov. George Ryan out of prison.

After leaving office, he joined the Chicago law firm Winston & Strawn. In 1993, he became chairman of the firm.

"There's no man in the history of Illinois that ever was a mentor or created spots and began careers," said Dillard. "Jim Thompson launched the careers of so many of us. We lost a great governor, great man, great gentleman. In these turbulent times, Thompson's politics was very different. He worked with everyone."

On behalf of the entire state of Illinois, MK and I offer our deepest condolences to the family and friends of former Governor Jim Thompson.

Lt. Gov. Juliana Stratton said, "It was with great sadness that I learned of the passing of former Governor James R. Thompson. My heart goes out to his family and friends in this time of sorrow. Thompson was a powerful man of vast influence, yet he possessed a common touch and was known to many as simply, 'Big Jim.' As the longest-serving governor in Illinois history, he will be remembered as a hard-working man who dedicated his life to public service, and who always wanted the best for the people of Illinois. Thank you, Governor Thompson for your service to the state of Illinois."

Thompson's cause of death is not immediately known.

He is survived by his wife Jayne, his daughter Samantha and a 4-year-old granddaughter.

The family released the following statement:

The Thompson family is mourning the loss of a wonderful husband, father and grandfather. Jim Thompson's love and devotion to his family mirrored his lifelong dedication to his beloved State of Illinois. His guiding principle in public and private life was to help people and do what he could so they could have an opportunity to succeed. In that process, he achieved big things for Illinois that matched the life he lived. Due to COVID-19 restrictions, the Thompson family said it will be impossible to hold a public wake that would accommodate all those who would want to express their condolences and respect for the Governor and his life. A memorial service will be scheduled at a later date. Other arrangements are pending.

Jim Prescott, a family spokesman, said, "there are three parts, the policy, the politics, and the process, and he was the best at all of them. Larger-than-life career as governor, intensely devoted not just to the state but also to his family, that was reflected in everything he did, personally and private."

Prescott said during Thompson's rehabilitation "his heart gave out."

Thompson is remembered as a fiscal conservative but otherwise a moderate republican, and a champion of the state where he was born and raised.

Statement from Shirley and Michael Madigan:

"The passing of Jim Thompson brings great sadness to our family. He was a cherished friend. Jim Thompson should be credited with the modernization of Illinois government as best illustrated by the structure that bears his name. His pioneering commitment to the arts strengthened the fabric of our state. He was a hard-nosed political figure and a compassionate leader. We were honored to serve with him. On behalf of our children, Lisa, Tiffany, Nicole, and Andrew, we offer our deepest sympathies to Jayne and Samantha. We offer them prayers of comfort and strength in these sad times. Illinois is a better place because of Jim Thompson's work."

"From the time he signed the Political Honesty Initiative - to stop legislative conflicts of interest, double dipping, and advance pay for politicians - when he was first running for Governor in 1976, Gov. Jim Thompson stood for cleaning up corruption in Illinois politics and government.

"He had a personality larger-than-life, and his personality was bigger than he was. And he was 6'6". All the people I dealt with, he was the smartest. He could size up a situation immediately."

The Republican was Illinois' longest-serving governor.