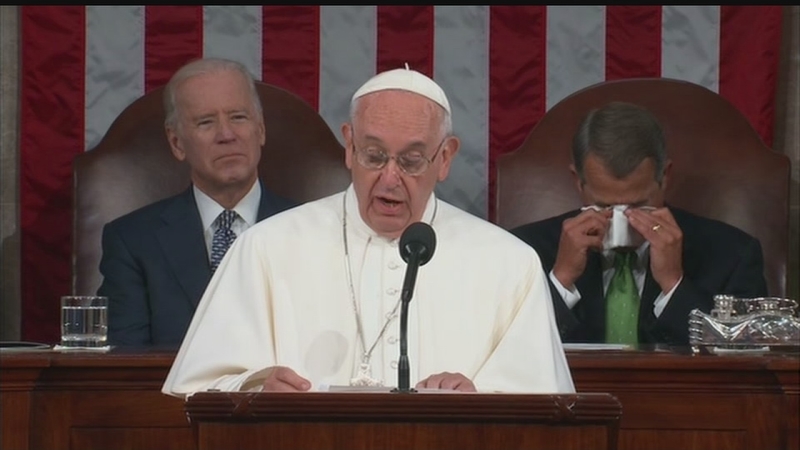 House Speaker John Boehner tears up while listening to pope

WASHINGTON -- Speaker of the House John Boehner has been known to show his emotions on occasion and his meeting with Pope Francis Thursday morning was no exception -- Boehner was visibly teary-eyed while meeting the pontiff ahead of his speech before a joint meeting of Congress.

Boehner's eyes moistened as the pope told him he was glad to be there. He also appeared to tear up again at the beginning of the pope's speech in Congress. Awaiting the pope's arrival, Boehner repeatedly straightened his tie and shifted from foot to foot, and joked and chatted with reporters about the history of the House furnishings. Their visit lasted only a few minutes. Tens of thousands wait outside, with lawmakers and guests seated in the House chamber for the first speech by a pope to Congress.

Boehner told those waiting with him that the pope's visit was "a big deal" for him, as a Catholic.

With a handshake and a smile, John Boehner welcomed Pope Francis to his ornate ceremonial office in the Capitol prior to the first papal address to Congress in history.

The Ohio Republican told Francis, "Your Holiness, welcome, really glad that you're here."

The two men then sat next to each other, accompanied by Vatican and church officials and Boehner aides.

Boehner told the pontiff that his staff had urged him to wear the green tie he was sporting. That drew a compliment from Francis, delivered through an interpreter.

The interpreter told Boehner, "He says it's a tie with the color of hope."

Boehner could also be seen weeping as he stood on the Speaker's Balcony as the pope waved and addressed the thousands of people gathered outside.