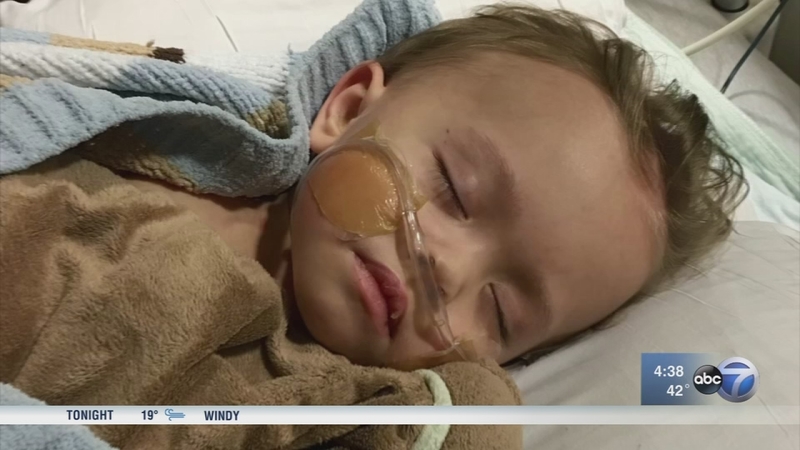 JOHNSBURG, Ill. (WLS) -- A high school friendship was rekindled by a medical crisis and the reunion resulted in a young boy receiving a life-saving kidney transplant.

Two-and-a-half-year-old Miles Wagner is by all accounts a happy boy, despite a rare liver disease that has caused him to spend much of his young life in the hospital.

Miles underwent a liver transplant a year ago, but the metabolic abnormality had already caused kidney failure. Miles' parents, Ashley and Ryan Wagner, took him to dialysis five days a week while waiting for a kidney donor.

That's when Liz Wolodkiewicz, a high school classmate of Ryan's, found out through Facebook that Miles needed help.

"I still remember the day that Miles got sick and how my heart just sank for them," she said.

Wolodkiewicz got tested and found out she was a match for Miles after two other people did not qualify.

"It was the answer to many prayers. It was that light at the end of the tunnel we had been waiting for," said Ashley Wagner, Miles' mother.

On Monday, surgeons completed a successful procedure giving Miles one of Liz's kidneys. It was a relief to his parents - especially Ryan Wagner, who is diagnosed with stage IV colon cancer. Ryan has gone through more than 70 rounds of chemotherapy and says Miles inspires him to stay positive.

"He is just so happy with everything he does. It would almost make me feel guilty not to have the same kind of happiness even though I'm going through my own struggles," Ryan Wagner said.

Liz said she had no second thoughts about the surgery and has only met Miles twice.