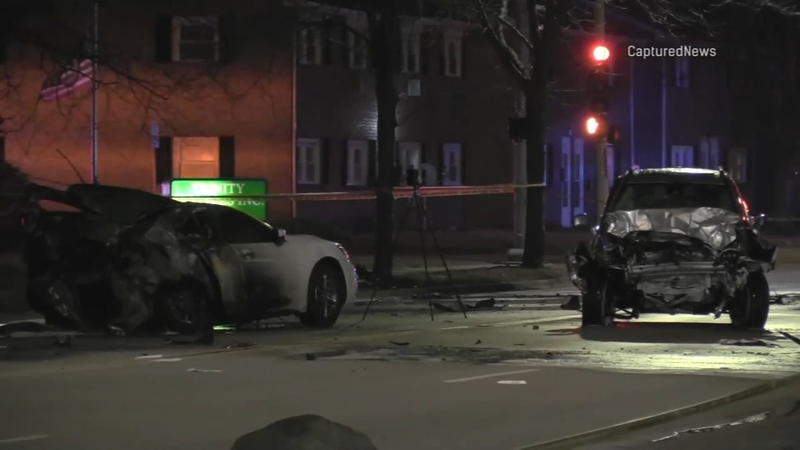 JOLIET, Ill. (WLS) -- A fiery crash Tuesday night in Joliet has left a woman dead and another injured.

The crash happened just after 8:15 p.m. near Glenwood Avenue and Springfield Avenue, according to police.

Police said a 46-year-old woman driving a crossover sports utility vehicle was traveling westbound on Glenwood Ave. in the inside lane at a high rate of speed. As she approached the intersection of Springfield Ave, she struck the back of a sedan that was stopped at a red light. The impact forced the vehicle into a tree on the north side of the intersection before it burst into flames, according to a preliminary investigation.

Responding officers tried to render aid to the driver in the sedan, but she was pronounced dead at the scene, according to officials.

The Will County Coroner identified the victim as Ednalice Pagan-Romney, 50, of Aurora.

"It was so close to our vehicle that it shook our vehicle," said John Moore, who witnessed the car whizzing by.

"It was so quick, all we saw was a flash," added Genny Moore.

Just as the Moore family was driving home from dinner Tuesday night, they said their lives literally flashed right before their eyes.

"We had a green light. A car went right through the intersection, and it wasn't slow," said John.

"Then, all of a sudden there were sirens just going nuts, pretty quick. John was calling 911 to let them know that somebody was driving at a high speed and, at that point, they said they were already dealing with, I guess, the impact," Genny said.

Now, as crews clean up the debris left behind, a small memorial remains.

"I went back there this morning and laid flowers because, just felt a connection with somebody that I didn't even know," John said. "Just why? There's no - I can't imagine a reason to be driving like that through local streets."

The driver of the sedan has not yet been identified.

The woman driver was transported to a nearby hospital with serious injuries.