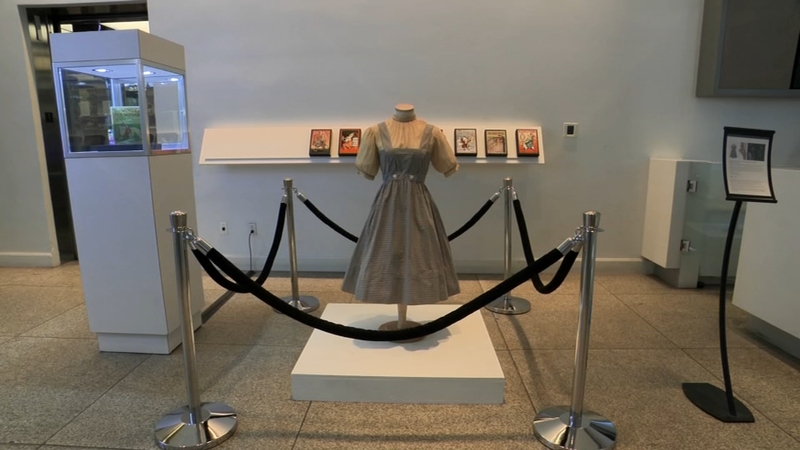 CHICAGO -- A dress worn by Judy Garland in "The Wizard of Oz" may not go up for auction after a woman in Wisconsin filed a lawsuit claiming she is its rightful owner.

A blue gingham pinafore dress that Garland wore as Dorothy is set to be auctioned to raise money for the Benjamin T. Rome School of Music, Drama, and Art at the Catholic University of America in Washington, DC.

The dress, considered lost for decades, was rediscovered last year in a shoebox at the university's drama department.

It had been gifted in the 1970s to the university's then head-of drama, Rev. Gilbert Hartke, by actress Mercedes McCambridge, a contemporary of Garland's, the university said.

The woman says Hartke was her uncle, and the dress is rightfully hers.

International auction house Bonhams is set to feature the dress in its "Classic Hollywood: Film and Television" sale. The rare piece of Hollywood history is expected to sell for between $800,000 to $1.2 million, Bonhams said in a news release.

Memorabilia from the beloved film has been auctioned for sky-high prices before: Bonhams sold the original Cowardly Lion costume for over $3 million in 2014, and another dress worn by Judy Garland fetched over $1.5 million at a Bonhams auction in 2015.

The "lost" dress is particularly unique because it retains the white blouse worn under the pinafore -- one of only two of Garland's costumes to maintain this feature, the auction house said. It was worn by Garland during the scene when Dorothy faces the Wicked Witch of the West in the witch's castle, said Bonhams.

"Discovering this historic dress was a memorable moment for The Catholic University of America and we are proud to present it for auction, so that the next collector can own a piece of history," said Jacqueline J. Leary-Warsaw, dean of the Benjamin T. Rome School of Music, Drama, and Art.

The auction for the dress is scheduled for May 24 in Los Angeles, the university said in a news release.

ABC7Chicago contributed to this report