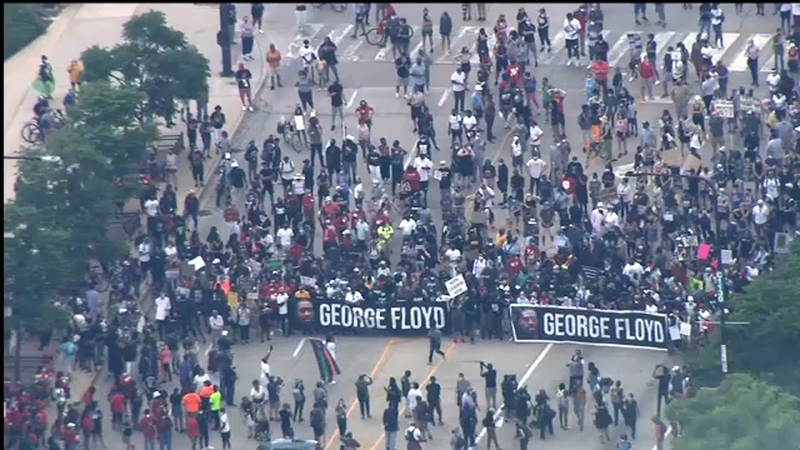 CHICAGO (WLS) -- Many in the Chicago area have celebrated Juneteenth for decades, but the movement following the death of George Floyd has given the day renewed significance.

Carrying a banner with Floyd's name, a coalition of residents, politicians and the faithful marked Juneteenth with a march and rally calling for an end to racism.

"We made our signs so if you can't hear our voices, at least you can read our signs," said Kenya Grooms, who brought her daughter, nephew and niece to the march.

The event stepped off at Roosevelt and Columbus Friday at noon, as Gov. JB Pritzker issued a proclamation honoring June 19 as Juneteenth in the state of Illinois.

"We're fighting for justice and equality and that's what it's all about on Juneteenth, which, by the way, we're going to make a state holiday," Pritzker said.

RELATED: What is Juneteenth? The history behind the holiday celebrating the end of slavery
EMBED More News Videos

Juneteenth is the oldest known celebration commemorating the ending of slavery in the United States.

Organizers say they want to see policies and lasting legislation that end systemic racism and support economic and community development.

Sen. Tammy Duckworth said, "Black Americans are being killed on a regular basis, doing normal every day things that the rest of us take for granted."

While the march ended with a rally in Grant Park, Kyri Sitara hopes this movement won't end there.

"I'm here because my silence is compliance," Sitara said. "I want change."

People of all ages and races took part in the faith-led march in Chicago's Grant Park Friday.

People of all ages and races took part in the faith-led march.

An 8-year-old boy tried to escape his thoughts to keep going.

"Ever since all this stuff going on, it almost made me cry and I don't want to cry," said Josiah Holloway.

Josiah's mom wants to protect him from the pain, but she also wants to push him to take a stand.

"I am a Black girl from the South Side of Chicago and I think it is important that we are not silent about issues that are going on," said Anna Winder.

"I feel strongly that there are problems of systemic injustice and racism in the country," Aaron Cohen said. "Only when we come together, we can start to address these problems."

At least a thousand people marched in the Loop, gathering at Daley Plaza to commemorate the end of slavery in the U.S. and to call for justice and equality in Chicago.

Meanwhile, at least a thousand people marched in the Loop, gathering at Daley Plaza to commemorate the end of slavery in the U.S. and to call for justice and equality in Chicago.

"We are dying daily. I have a young son who's 13 years old. I'm out here so he can see what we need to do to fight for our rights," said marcher Raynard Paige.

Paige took off work to fight for justice and commemorate the Juneteenth holiday for his son.

Elgin White at Daley Plaza did the same, for his nephew Jordan.

Marchers said the hope and the work ahead is to root out systemic racism here in Chicago and across the country.

"Hopefully he'll be able to be an impact on his generation and the world," White said.

The rally filled the east side of Daley Plaza.

There were calls for an end to police brutality and justice for the black lives killed by police, including Breonna Taylor, George Floyd and Ahmaud Arbery.

"We're finally acknowledged to be free. It's very powerful. The ambiance is beyond Black Lives Matter," said marcher Cleopatra Draper.

And a call for equity, across our nation and city, as we celebrate freedom.

"It's just so impactful, so emotional just to be out here. Just to experience this, what our ancestors have sacrificed over the decades. What they've endured. The racism. The torture," said Tyeisha Smith. "And just to be here in a manifestation of it all is so amazing."

On Friday morning, The Garfield Park Advisory Council, along with the park district, held it's third annual Juneteenth military honors.

A crowd gathered to remember African Americans who have served this country.

During the ceremony, the national anthem was followed by the Black national anthem. Three veterans spoke about their experiences and about the current state of the country.

"We want everyone to understand that we have some serious issues in the United States as Black folks, and we want to be heard on these issues. Our issues are real," said Jim Hobson, a Vietnam Veteran.

The Chicago area will mark Juneteenth with a series marches and rallies Friday.

"A lot of times our Black veterans are not honored and they fought so hard to win the war for us to be free, and a lot of times they're kind of neglected and they're missed," said Carol Johnson with the Garfield Park Advisory Council.