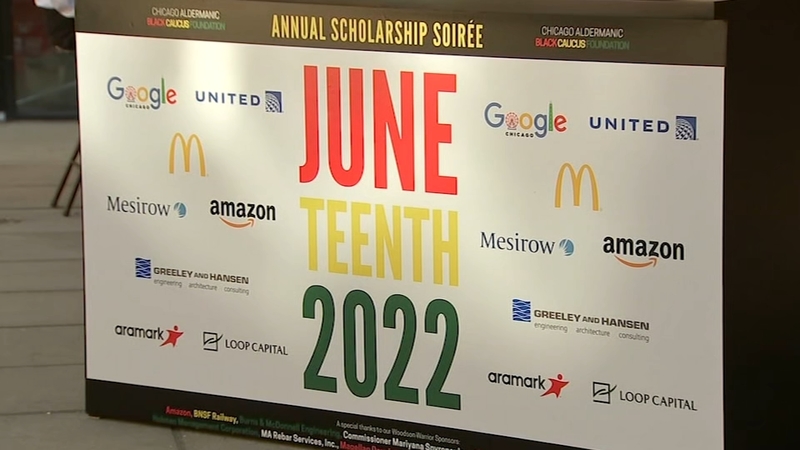 CHICAGO (WLS) -- Celebrations continue Monday for Juneteenth, the federal holiday marking the end of slavery in the U.S.

Since it fell on a Sunday, it's being observed Monday across the country.

St. Sabina Church kicked off its Juneteenth festivities and Chance the Rapper is to perform at the DuSable Museum.

There are so many local events happening.

Well before Juneteenth became a federal holiday, the National A. Phillip Randolph Pullman Porter Museum has been celebrating Juneteenth.

"It is the day that the slaves got free even though they were supposed to be free two years ago," said Samyra Brady, a festival-goer. "In order to go forward in life you have to know where you came from in the past."

Monday marked their 10th year hosting a gathering to commemorate the end of slavery in Texas, which happened more than two years after the Emancipation Proclamation.

"The significance of this is that we are all about history, heritage and culture, we use every vehicle that we can to help educate people," said Dr. Lyn Hughes, National A. Phillip Randolph Pullman Porter Museum founder.

The day began with a formal presentation, and programming highlighting connections between the 1893 World's Fair and historical Black figures.

"I'm from a family of 13. My father was actually ran out of the south. So to see this day being honored as a national holiday, and especially in the city of Chicago, a city that has been full of racism for as long as I've been in the world, and to see now this actually coming to full circle, it's just a godsend," Cynthera Penny said.

It's a free all-day event, which includes a youth basketball tournament, live music and food.

Juneteenth Illinois events continue Monday, since the federal holiday fell on a Sunday this year.

"It's important because, as we are all happy about the holiday, right, we have to be reminded that this is all about the recommitment to community, the preservation of our history, heritage and culture and the opportunity for us to set the landscape for where we're going," said David Peterson Jr., president and executive director of the National A. Phillip Randolph Pullman Porter Museum.

"I like it. It's real nice. You get to be meet cool people. You get to show them your skills," said Atrian Moore, a Chi-ball Y League player.

Chris Nelson is another player.

"You know how people out here are into gun violence. Instead, you can be out here playing basketball. It's way better. You don't have to be in the streets or none of that," Nelson said.

Armond Farmer is the founder of Chi-ball Y League.

"We just want to teach the kids about celebrating us, our heritage, the holiday and just coming together to have unity," Farmer said.

It's a family-friendly event aimed at bringing the community together and spreading positivity.

"Very important to know your family is more than just your immediate family that you have a community," said Karolyn Wright, a festival-goer.

"It is important for me to see the younger generation and the older generation to be able to come together and it's like we are trying to these younger kids that there is a better life," Erving said.

"When I look around the room, it's not just all Black. I see white celebrating Juneteenth, I see Mexicans celebrating Juneteenth. So the fact that we all can come together and celebrate something like this, I think is absolutely amazing," said Shawanda Simmons, owner of Passion Eats catering.

"We are all so proud of you and never forget that you are our ancestors wildest dreams," said Lt. Gov. Juliana Stratton.

Another event at the Field Museum got underway at 10 a.m.

The Field Museum is celebrating Juneteenth with a series of events and a free day for local residents.

Chicago native Chance the Rapper is hosting the event that is filled with something for the entire family.

Meanwhile, celebrations Sunday played out at the DuSable Museum.

"I don't think a lot of people knew about Juneteenth in general, but now that the awareness is out there and the whole positivity as far as the African American experience, and how much contribution that African Americans have done to this country as a whole, it's just good to finally recognize it," said Greg Shuford, who lives in Hyde park.

Other events Sunday included the recognition of Black fathers, which was highlighted in South Shore at a cookout hosted by the group "Real Men Cook."

The governor also hosted an event at Kenwood Academy High School Monday morning. That got underway at 10:30 a.m.

In west suburban LaGrange, it was the words and stories of civil rights activist and cousin of Emmett Till, Rev. Wheeler Parker Jr., that marked the holiday.