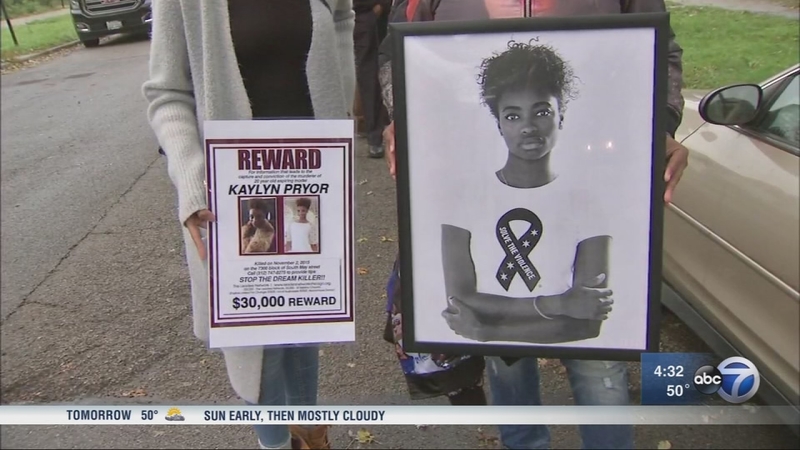 CHICAGO (WLS) -- The family of Kaylyn Pryor, an aspiring young model from Evanston who was fatally shot in Chicago two years ago Thursday, has increased the reward for information leading to an arrest to $30,000.

It has been two years since Kaylyn Pryor was shot and killed near her grandparents' home in Englewood. Family and friends gathered to mark the somber anniversary. They hope a boost in reward money will result in new information about her killer.

The 20-year-old was shot to death in 2015 while she was waiting for a bus after visiting her grandparents in Englewood. Pryor was the unintended target. A 15 year-old near her was also shot in the leg during the shooting.

No one has been charged in Pryor's death.


Pryor, who had won the Mario Tricoci "Make Me A Model" competition, posed for an anti-violence campaign just weeks before she was killed.

The family said they are still desperate for answers. Friends and supporters passed out flyers to try and get new leads on Thursday afternoon.

"I wish we could get to a point where these young kids could think twice. They don't realize how many lives they are hurting and they are ruining their own lives," said Alan Scott, Pryor's father.

Pryor's father and sister called her Kay. Though they preferred being in the background of Kaylyn's modeling career aspirations, the murder pushed her father into advocacy.

Amid their grieving, they suffered another loss. The Pryor sisters' mother, Royce Pryor, died less than a year after the murder. A new grave plaque for the mother and daughter was just installed.

"She would go and speak and do certain shows and whatnot. So I think it was a lot of stress with her and grieving and then actually trying to be that advocate," said Chantal Pryor, Kaylyn's sister.

"It basically took its toll on her. The heart attack and she just never woke up," said Scott.

The father and daughter are grateful for the support and are trying to inspire positivity. They call it the Kay Way.

"There is a Kay Way of doing things," said Scott.