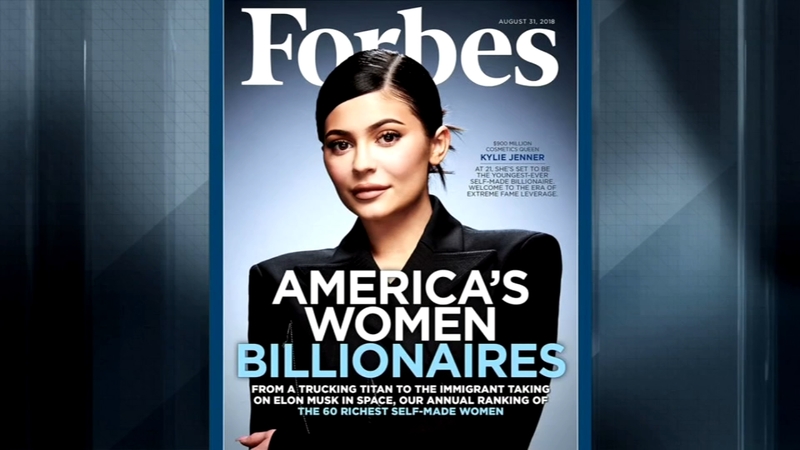 You know it's something when a dictionary feels the need to weigh in.

After Forbes magazine touted "America's Women Billionaires" with Kylie Jenner on its cover, the backlash was immediate over the reference to the reality TV star as "self-made."

"At 21, she's set to be the youngest-ever self-made billionaire," the cover reads. "Welcome to the era of extreme fame leverage."

The publication also tweeted the news using the hashtag "#SelfMadeWomen."

The magazine estimated that Jenner's cosmetics company, reality TV gig and endorsements have helped the 20-year-old (she turns 21 in August) rake in a $900 million fortune.

CNN has not confirmed that total, and since her company is privately, 100% owned by Jenner, she's not required to report her finances publicly.

Whatever Jenner's worth may be, many on social media took exception to her being called "self-made" since she is a member of the wealthy and famous Kardashian/Jenner clan.

"Calling Kylie Jenner self-made without acknowledging anywhere the incredible headstart she had is what allows people to turn around and look at poor people and ask them why they haven't become billionaires yet," one person tweeted. "Her story is not inspiring or motivating for anyone."

Even Dictionary.com took a moment to tweet the definition of "self-made," which "means having succeeded in life unaided."

"It is not shade to point out that Kylie Jenner isn't self-made," Gay tweeted. "She grew up in a wealthy, famous family. Her success is commendable but it comes by virtue of her privilege. Words have meanings and it behooves a dictionary to remind us of that."

A spokeswoman for Forbes told CNN the publication "fully acknowledges that within the term 'self-made' there are many who are more self-made than others."

"In fact we began scoring members of the Forbes 400 on a scale of 1 to 10 to capture the variations," the spokeswoman said. "The link to that is here. Yes, Kylie comes from a wealthy family and she got a visibility boost from her family but she owns her company and is valued based on earnings she has personally received and on the value of the company she founded."