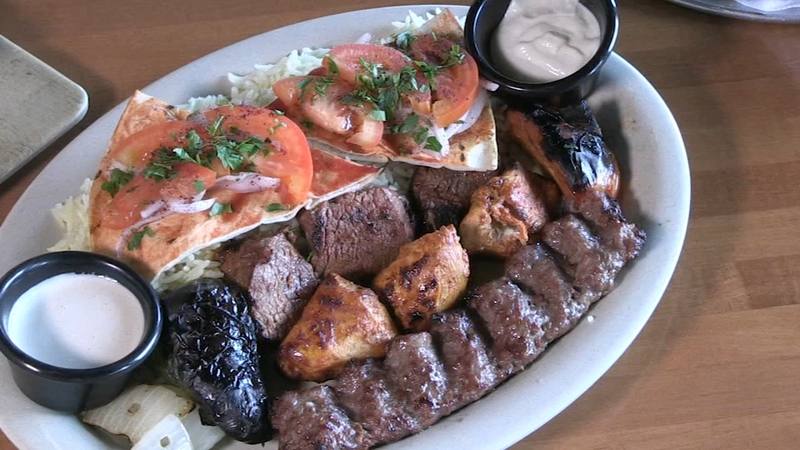 LINCOLNWOOD, Ill. (WLS) -- The food of Lebanon is being cooked with precision in Lincolnwood. From kebabs and spreads to the meticulously-assembled baklava, he says a lot of ex-pats have gravitated there recently, seeking the flavors from home.

The kitchen at Libanais, which is French for Lebanon, is deceiving. This Lincolnwood restaurant has a small one up front, where you'll see them slice off beef and lamb shawarma and tuck it into wraps jammed with pickles and tahini. You might see them grill off kebabs or assemble appetizer platters. But the real action is in back, where two massive kitchens work simultaneously. One on savory items, the other on sweets, namely, baklava.

"We sell retail and we sell wholesale, we have a store on Amazon, we sell nationwide, and we are in most of the grocery stores in Illinois," said Nasr Khonaisser, the owner.

But there's also plenty to eat for lunch or dinner. Consider a healthy appetizer sampler, with Lebanon's greatest hits.

"It has hummus, it has baba gannoush, it has grape leaves (vegetarian grape leaves cooked in olive oil and lemon juice), we have falafel and we have a little bit of taboule, which is our base salad in Lebanon, it's our famous salad, which is parsley, mint, onions, cracked wheat, tomatoes, lemon juice, olive oil and spices," he said.

EXTRA COURSE: Steve takes a closer look at a couple of the desserts you can order at Libanais
EMBED More News Videos

In Steve's Extra Course Video, he takes a closer look at a couple of the desserts you can order at Libanais.

Mana'eesh resemble pizzas, but the toppings are more likely to include zaa'tar - that greenish, herb-and-sesame-jammed spice blend - or cheese. Get it baked in their oven to-order, then topped with tomatoes, fresh mint leaves and a handful of chopped green olives. Wraps are equally impressive, with a slight difference between the chicken and beef-lamb combo. In the latter, the fillings are pretty standard.

"We use onions, parsley, sumac sour spice, which is a very healthy spice, and we use cucumber pickles, we use tomatoes and we add the tahini sauce," said Khonaisser.

From the menu's Turkish influence, Imam Biyaldi: a savory, filling vegetarian dish of lightly fried eggplant slices that are topped with a chunky sauce of chickpeas, tomatoes, peppers and onions, then baked for about 30 minutes until the vegetables are fork-tender. No surprise there are so many Mediterranean influences on this menu, including an all Lebanese wine list, considering the country's history of occupation and geographic location.

"Lebanon is on the Mediterranean as well, so it's a mixture of Mediterranean, French and Turkish food," he said.
I know the tendency is to always go for shawarma, kebabs and if you like eggplant - baba gannoush. But I highly recommend this imam biyaldi, I could not get enough of this the first time I came here and also to pair with it Lebanese wines.