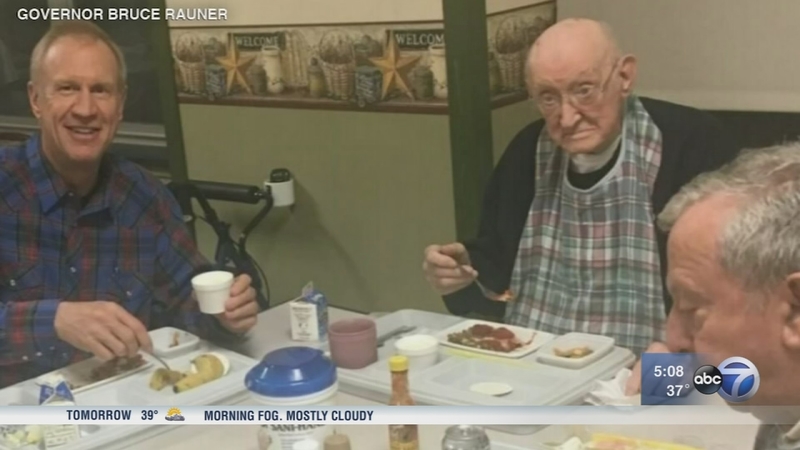 CHICAGO (WLS) -- Illinois U.S. Sen. Tammy Duckworth says she thinks the Rauner administration can do a better job of working to find solutions to the water problem at a veterans home in Quincy that has contributed to the deaths of 13 veterans due to Legionnaires' disease.

"I think our veterans deserve nothing but the absolute best and they're not getting that at this time," Duckworth said during an unrelated stop at a Near North health center for low income patients.

Governor Rauner, who has been staying at the home since late last week, said his administration has done everything the Centers for Disease Control has recommended in trying to clean up the water problem, but Rauner also said last week that sometimes deaths happen, pointing to the fact that the veterans are getting very old and are more susceptible to getting sick. Duckworth called that statement "shameful." Rauner said in a statement he plans to stay at the facility until mid-week "when I'll report more fully on this incredible experience."

"Well, I would rather that he fix the problems at that home than rely on gimmicks and, by the way, I heard that he is staying in the one building that did not test positive for Legionnaires'," Duckworth said.

Rauner spokeswoman Patty Schuh vehemently denied that allegation. "It is absolutely not true." She added that in the Governor's nearly week-long stay he has been all over the 200 acre campus and is staying in a residence hall where Legionnaires' has been detected.

On Tuesday, state Sen. Tom Cullerton, D-Village Park, will conduct a legislative hearing in Chicago to ask questions from the Rauner administration, the CDC and others trying to find solutions to the persistent Legionnaires' problems at the Quincy facility.

One thing all sides have in common is a desire to find out why veterans have been getting sick and what can be done to fix the problem.

At the Quincy Veterans home, the problem of Legionnaires' disease is still a concern and the Rauner administration has made it clear that they have followed all the recommendations by the Centers for Disease Control, since the first outbreak occurred more than two years ago.

State Senator Tom Cullerton, who heads the Veteran's Affairs Committee, said lawmakers want to know what was done after the initial outbreak and again after the second one in 2016.

The most recent report released by the CDC last week shows the state is making progress in reducing the number of cases and making the water safer.

"The risk of Legionnaires' disease to the residents is greatly reduced compared to what it was in 2015. With respect to the concerns of the citizens, we hear those," said Nirav D. Shah, Director, Illinois Department of Public Health.

The state contends residents are safe.

"If my father were a veteran, and he needed round the clock, long term care, I would not hesitate for a second to have him check into the veteran's home in Quincy," said Shah.

Sen. Cullerton said he would like to see the state put out a bid to completely replace the piping in the aging veteran's home.