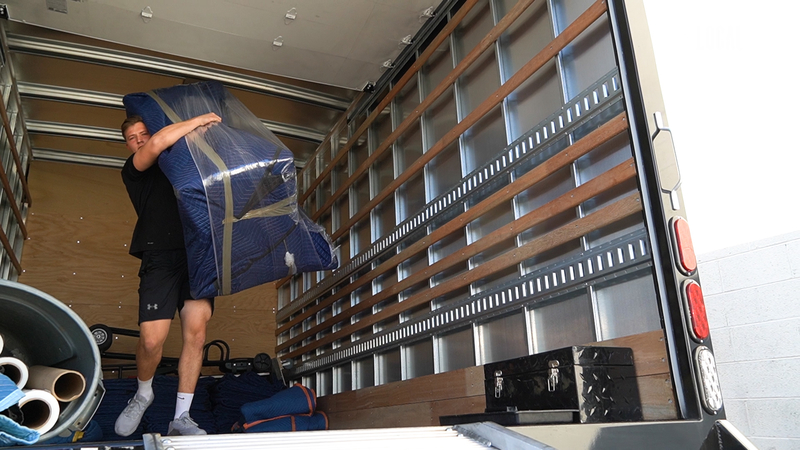 FRESNO, Calif. -- This moving company, made up largely of student-athletes, is helping domestic violence victims move out of abusive homes for free.

"We're so much more than just a moving company, we're potentially saving a life every time we do one of these moves," said Meathead Movers CEO Aaron Steed.

Steed started the company with his brother on California's Central Coast in 1997 while trying to make money as a student-athlete in college. The company has grown to include locations around Central and Southern California, including in Fresno in 2015.

"Basically, the job expectation at Meathead Movers is you need to be able to move heavy things, and then run to get more," Steed said. "And it wasn't just moving, we turned it into an athletic event."

Many of the employees at Meathead Movers are student-athletes or current college students. The Fresno office is filled with weights and workout equipment to keep the team active between jobs.

"It's just one of those things, guys try to show off," said Joel Gomez with a laugh. "One of the things we like to do before a job or after a job is pump iron."

The company has also been helping victims of domestic violence after Steed noticed a need as he was starting the company.

"It was reported recently that of all the large cities in the state of California, Fresno County has the highest per capita calls for domestic violence," said Nicole Linder with the Marjaree Mason Center. "It's a huge issue in our community."

Meathead Movers partnered with the center when they opened their branch in Fresno in 2015, aiding families with their escape from domestic violence free of charge.

"They moved over 60 Marjaree Mason families just last year. They say that they treat them with the same respect as if they paid full price, and that kind of attitude and that kind of support is priceless," Linder said.