WLS
By Will Jones, Ravi Baichwal and Diane Pathieu 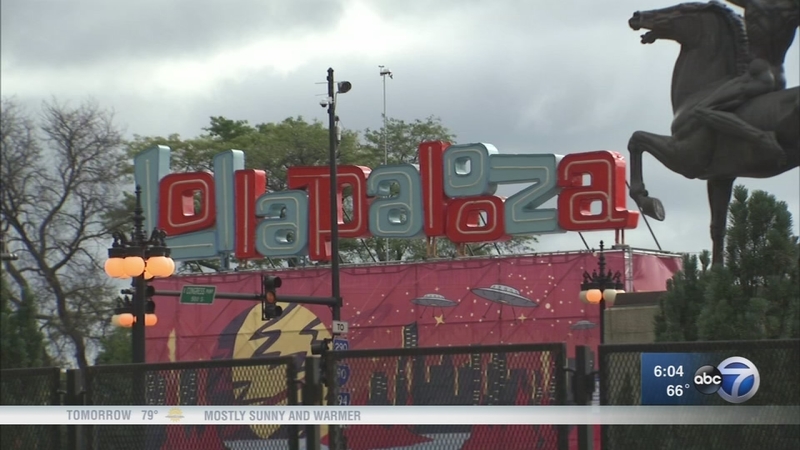 CHICAGO (WLS) -- Friday was a cooler, but near perfect day for an outdoor festival. It was a much different story Thursday night.

Partly sunny skies and much cooler temperatures greeted fans on day two of Lollapalooza on Friday. Gray skies did little to dull enthusiasm where the vibe was "everyone is in this together."

Patrons flooded into Grant Park when gates opened at 11 a.m. From the air, the grounds didn't look too much worse for wear after last night's performances were cut short due to storms, but the worry remains.

As the crowd swayed to rapper Jidenna, a group of friends remarked at how music brings people together.

"People come from around the world and it's a treasure," said Bill Gonzalez from Green Bay, Wisconsin.

A group of veterans of all but three of the Lollapalooza festivals have graduated to the VIP Platinum lounge. They say that $4200 per person for four days of pampering is the only way to get through the Lolla experience.
"You're being pampered up there, why not, you only live once," said Lollapalooza attendee Pat Kane.

Their VIP digs should protect them from virtually anything.

It's still worth keeping an eye on the weather though.

"We're always watching weather closely in Chicago. We're back and forth with the National Weather Service throughout the day. We have an onsite weather forecaster in our forward command post," said Rich Guidice with the OEMC.

On Thursday night in the middle of her performance, headliner Lorde stopped and told the crowd the show was over.

"Hold on one second guys, that's my production manager. If he's walking on stage that means they're having some kind of conversation about the weather right now," she said, as the crowd vocalized its disappointment.

Shelby Belanger was there and said it actually made for a unique experience.

"Honestly, it kind of made it," she said. "We had so much fun with it. Everyone was just enjoying the rain, and then it just down-poured really, really bad, so like, we all looked like we took showers by the end. And it was fun, it definitely didn't ruin anything."

On Friday, crews worked around the muddy mess and standing water by spreading mulch to prepare for the day.

Attendees were lined up by 8 a.m. Friday.

On Thursday, 100,000 attended the festival, 72 were transported to hospitals, and two people were arrested.

Heavy thunderstorms forced day one of Lollapalooza to end early with headliners Lorde and Muse still on stage.

Singer Lorde, who was onstage at the north end of the park, tweeted after her set was called off that she had "the most spectacular show planned."

Matt Bellamy, lead singer of the band Muse, said on his Twitter page that officials made the band leave the stage after just three songs. Bellamy called it a nightmare and said he was "gutted."

The second day of Lollapalooza is expected to go ahead as scheduled Friday. Performers set for day two include blink-182, The Killers, DJ Snake and Run the Jewels.

Grant Park is being evacuated due to weather. Please make your way to the nearest exit. https://t.co/U5S24qzchL pic.twitter.com/lhGRsJGBW5

Organizers said they decided to cut the performances short due to an approaching storm and warnings from the National Weather Service.

"We are disappointed to have to end today's performances early, however our first priority is the safety of our fans, staff and artists," said Sandee Fenton, Director of Publicity for C3 Presents, the promoter behind Lollapalooza.

If there is severe weather or another emergency situation at Lollapalooza, there are shelter sites in underground parking garages around Grant Park. One of the shelters is at Grant Park North, located at 25 North Michigan Avenue between East Madison and East Washington streets. Another shelter is at Grant Park South, located at 325 South Michigan Avenue between East Jackson Boulevard and East Van Buren. Another shelter is at the Millennium Lakeside garage located at 5 South Columbus Drive, between East Monroe and East Randolph streets.

There are signs to direct people to these locations. Safety officials will be available to give directions.

More than 170 performers will hit eight stages at this year's four-day music fest. Wiz Khalifa, Lorde, Muse and Cage the Elephant were a few of Thursday's headliners. CLICK HERE for the full concert schedule.

Gates opened at 11 a.m. Festival-goers will need wristbands to get in and will be subject to a security screening. Large bags are prohibited and all bags will be searched. Attendees can re-enter up to three times per day.

CLICK HERE for additional information on allowed and prohibited items, as well as tips for attending Lollapalooza.

Parking will be available, but public transportation is probably the best to get to Grant Park. Lollapalooza organizers arranged shuttles from several different suburban locations. Divvy will have special valet service at the Jackson and Michigan station for bike riders.