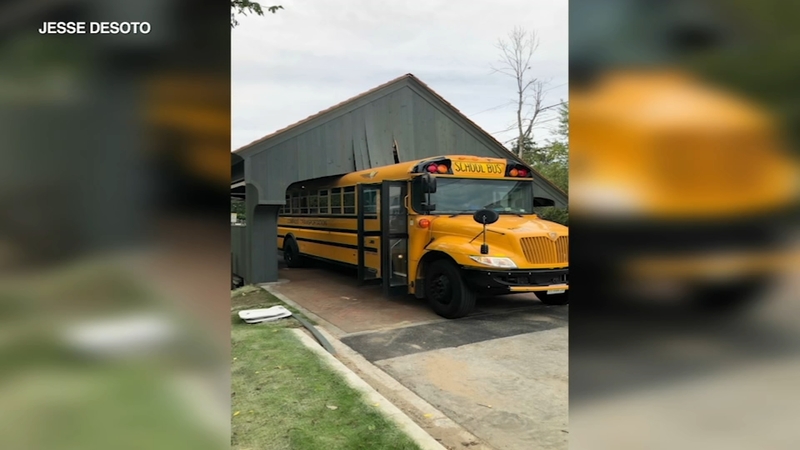 Just days after reopening, a chartered bus hit it this weekend, and as ABC 7 Chicago was there reporting Wednesday, it was hit yet again.

The Long Grove covered bridge is the heart and soul of the village. It graces the village emblem, storefronts and signs. Even the local ice cream shop pays homage to the historic bridge.

"It's just a huge part of where we've been and where we are. It's a connection piece," said Jesse DeSoto, Historic Downtown Long Grove Business Association president.

Two years ago, the covered bridge was recognized as a National Historic Landmark. Soon after, a box truck hit it, and it became structurally unsound. It was closed. Last Friday, it reopened after a massive two-year rebuild.

"Just over two years, the bridge came back, we had a ceremony, and less than 24 hours later, a bus goes through it," said Eric Wallor, Long Grove Covered Bridge Creamery owner. "It was jaw dropping. You couldn't make it up."

After receiving a top national honor for its historic covered bridge, Long Grove residents are facing a major setback.

And on Wednesday, she heard another one. Now, twice in less than a week, that covered bridge has been hit again, right during an interview with ABC 7.

The vehicle fled, but left behind debris. Ben Finch, who lives near the bridge, saw what happened.
"I think what goes through all of our minds is like, 'Wow, these people. What are they doing?'" Finch said.

It also left the Long Grove village manager picking up pieces of debris.

"People size it up and sometimes they don't size it up correctly, and they still go regardless of whether or not it's overweight or oversize," Village Manager David Lothspeich said.

He says the rebuilt steel reinforcements are keeping the bridge structurally sound.