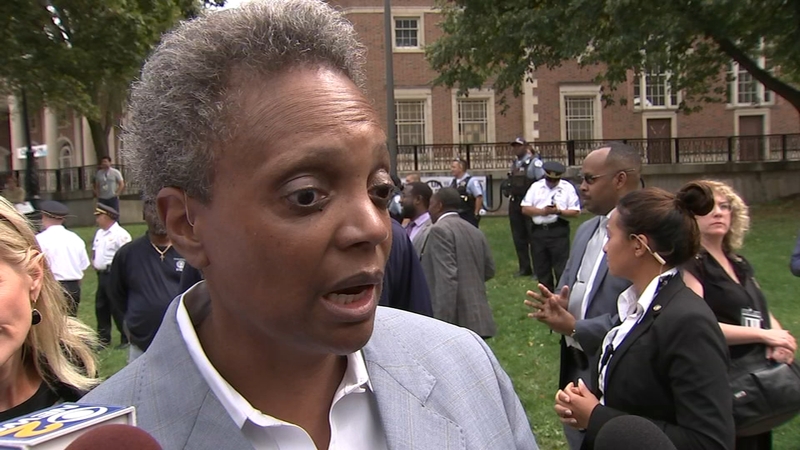 CHICAGO (WLS) -- Mayor Lori Lightfoot is not backing down in her war of words with Texas Sen. Ted Cruz over crime in Chicago.

The spat between Lightfoot and Cruz that started on Twitter on Monday is showing no signs of stopping.

Earlier Wednesday, Cruz tweeted about Chicago's crime: "Mayor, the most significant 'root cause' is that criminals have all the guns. One place to start is not releasing back to the public, but rather locking up violent, repeat offenders before they murder again."

Mayor, the most significant “root cause” is that criminals have all the guns. One place to start is not releasing back to the public, but rather locking up violent, repeat offenders before they murder again: https://t.co/U2Hyn0CSiH https://t.co/v7PLn0ICnc

"Well I almost sent a tweet back that said there's not enough characters in Twitter for me to be able to respond to multiple things that he said that were wrong and false," Lightfoot said.

The mayor accused Cruz of trying to divert attention from two recent mass shootings in Texas.

"I have to agree with that statement, you know. Until we create a mental culture of accountability in Chicago and get tougher on the illegal flow, then we'll continue to see these things go on. I stay out of the political part of it and I just focus on keeping the city safe," Johnson said.

Lightfoot called on Cruz to push for commonsense background checks for gun buyers and even challenged him to come to Chicago.

"He's welcome to come to Chicago anytime. We'll walk the streets of Austin together. I'll take him to Englewood and Roseland and other distressed areas that are also plagued by crime, so Ted if you want to help come to Chicago but do your job and make sure that the Senate actually does some work this session," Lightfoot said.

"We are a great city. Of course, we have our challenges, but we can never forget that we are one of the best cities in the world, and I am going to keep being a fierce advocate for that," Lightfoot said.

She noted that Chicago has taken more than 7,500 illegal guns off the street so far this year, saying the city is on pace to confiscate more than 10,000.