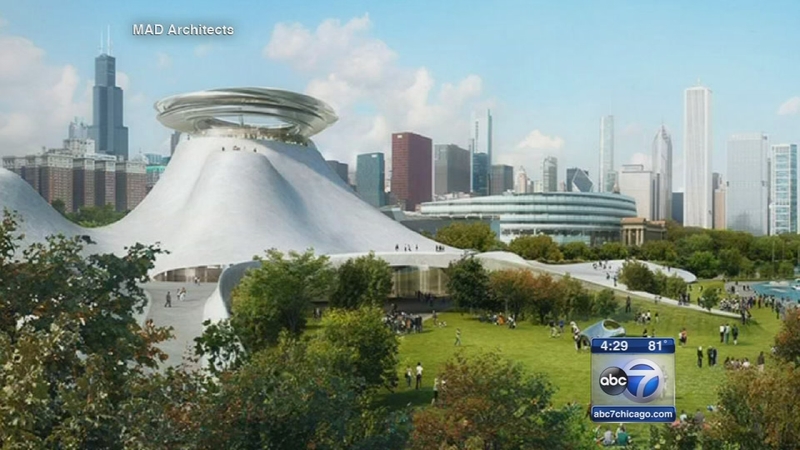 Chicago loses out on Lucas Museum

CHICAGO (WLS) -- The George Lucas Museum of Narrative Art will not be built in Chicago, museum officials announced Friday.

George Lucas and his wife, Chicago native Mellody Hobson, chose Chicago as the site for the museum in June 2014, but the original location of a parking lot near Soldier Field was met with opposition from the group Friends of the Parks. The group filed a lawsuit blocking the museum from being built on the lakefront.

The group also opposed an alternative proposal to locate the museum on the site of McCormick Place's Lakeside Center.

"No one benefits from continuing their seemingly unending litigation to protect a parking lot," said George Lucas in a statement. "The actions initiated by Friends of Parks and their recent attempts to extract concessions from the city have effectively overridden approvals received from numerous democratically elected bodies of government."

Museum officials said that the museum will be built in California.

"While Chicago will not be home to the museum, my wife and I will continue to enthusiastically support a wide variety of educational and cultural activities throughout the city," Lucas said.

In a statement, Mayor Rahm Emanuel said the museum would have been the largest philanthropic contribution in Chicago history at approximately $1.5 billion.

"This missed opportunity has not only cost us what will be a world-class cultural institution, it has cost thousands of jobs for Chicago workers, millions of dollars in economic investment and countless educational opportunities for Chicago's youth."

Emanuel criticized the group Friends of the Parks for derailing a "once-in-a-generation opportunity."

"We tried to find common ground to resolve the lawsuit - the sole barrier preventing the start of the museum's construction," Emanuel said. "But despite our best efforts to negotiate a common solution that would keep this tremendous cultural and economic asset in Chicago, Friends of the Parks chose to instead negotiate with themselves while Lucas negotiated with cities on the West Coast."

Friends of the Parks responded in a statement from Executive Director Juanita Irizarry and Board Chair Lauren Moltz saying that, "It is unfortunate that the Lucas Museum has made the decision to leave Chicago rather than locate the museum on one of the several alternative sites that are not on Chicago's lakefront. That would have been the true win-win."

Back in April, Hobson said her 72-year-old husband only considered a lakefront site in Chicago and did not have time for a protracted court fight.

"Two years of a lawsuit and then years to build it, he wants to see this museum built in his lifetime," she said.

On Facebook, St. Sabina Pastor Fr. Michael Pleger blasted the Friends of the Parks group as an "elitist gang."

"Don't ever tell me about gangs in the Community, some of the most powerful gangs in Chicago live in High-rise and seek to run the whole City!" wrote Pfleger.

South Side activist the Reverend Dr. Leon Finney, who campaigned for the $700 million dollar project, said the Friends of the Parks, by persisting with its lawsuit, had betrayed an entire city.

"This small group of narrow-minded individuals, less than 30, decided for all of Chicago," Finney said.