Malaysia Airlines Flight MH17 shot down by missile: US official GRABOVO, Ukraine (WLS) -- All passengers and crew members are believed dead after Malaysia Airlines Flight MH17 crashed in Ukraine near the Russian border. The U.S. government now believes a surface-to-air missile brought it down.

The plane crash burned near a village in eastern Ukraine that was being held by pro-Russia separatists. The gruesome scene is about 25 miles from the Russian border, where plane and body parts are scattered across a wide wreckage site that has been blockaded by the heavily armed rebels. They claim to have the black boxes, but promise to hand them over to Russian officials.

"Malaysia Airlines has confirmed that the aircraft did not make a distress call. The flight was carrying a total number of 295 people comprising 280 passengers and 15 crew members," said Malaysian Prime Minister Najib Razak.

The lack of a mayday call is consistent, experts say, with a radar-guided rocket fired from Russian-made ground-to-air missile batteries.

U.S. intelligence and analysis of the situation determined a single surface-to-air missile struck the aircraft at a cruising altitude, according to an official. The investigation has not determined from where the missile came- Ukraine or Russia territory- or who fired it. Ukrainian rebels fighting for alignment with Russia have been training on the missile weapons system, the only equipment in the region that would be capable of bringing down a target at 33,000 feet.

Ukraine military officials said the Boeing 777 was shot down by a Russian missile.

"We are not calling it an accident, or a disaster, but an act of terrorism," Ukraine President Petro Poroshenko said. The Ukraine Foreign Ministry says the plane was shot down by a Russian Buk missile.

Russian officials and pro-Russia separatists fighting near the rebel-held village of Hrabove where the plane went down are denying they were involved in the crash. They blame the Ukraine Armed Forces.

Poroshenko said his country's armed forces didn't shoot at any airborne targets. Airlines are now re-routing their flights so as not to pass through the Ukraine airspace.

Malaysia Airlines confirmed it lost contact with its plane 30 miles from the Russia-Ukraine border around 9:20 a.m. ET. Around 1 p.m. ET Thursday, video of heavy smoke from the crash reached the U.S.

Earlier Thursday, U.S. President Barack Obama said the U.S. will offer "any assistance it can to help determine what happened and why." He also said he has spoken with Russian President Vladimir Putin, who Tweeted his condolences to Malaysia.

"Condolences to Malaysian Prime Minister Najib Razak in connection with the crash of a passenger aircraft in Ukraine," Putin tweeted.

U.S. Vice President Joe Biden chose his words carefully, calling this "a grave situation" as he spoke about the MH17 crash while in Detroit Thursday. He said it appears the plane was brought down on purpose.

"I want to be sure of what I say, apparently, had been shot down. Shot down, not an accident. Blown out of the sky. We see reports that there may have been American citizens on board. Obviously that's our first concern," Biden said.

Putin asked the prime minister of Malaysia to convey his deepest sympathy and support to the victims' families. 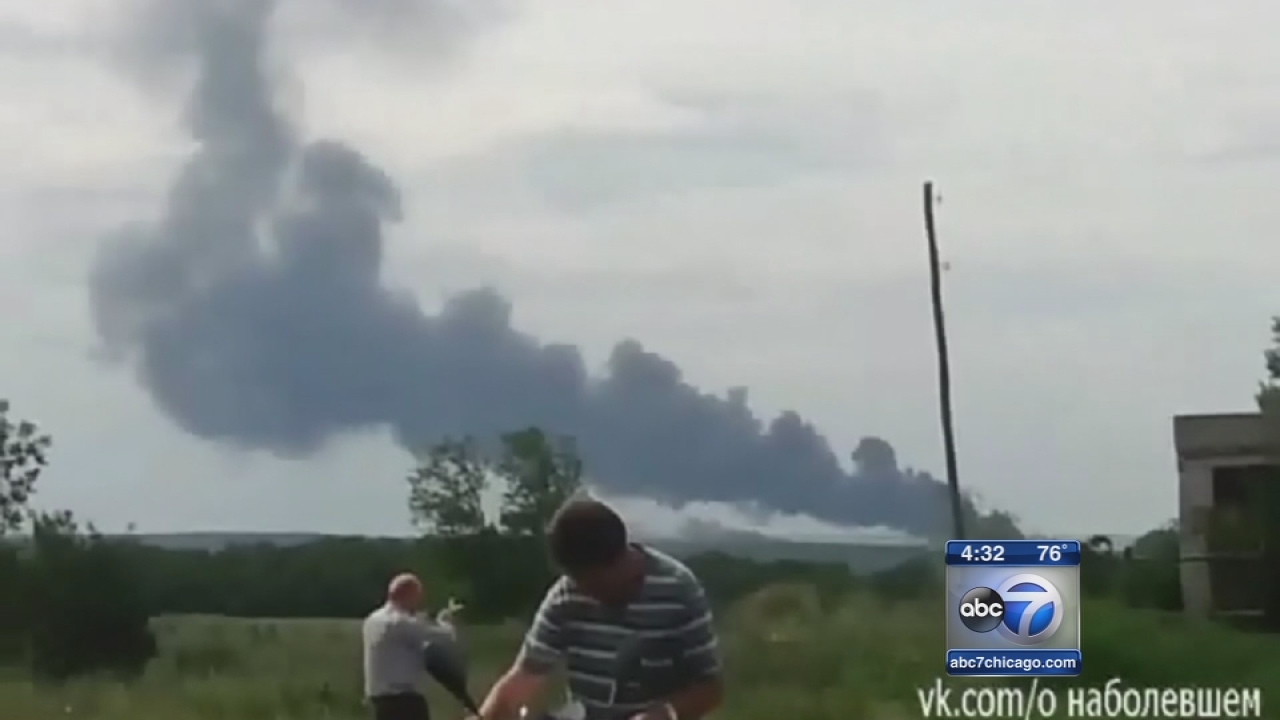 Chicago woman may be among jet crash victims
The founder of the Malaysian Club of Chicago spoke to Eyewitness News about the report that a Chicago woman was on Malaysia Airlines Flight MH17.

Of the 298 people on the plane, officials determined 154 were Dutch, 27 Australian, 43 Malaysian (including 15 crew and 2 infants), nine British, 12 Indonesians, four Belgians, three Filipinos, and one Canadian. That leaves 41 unidentified passengers.

The U.S. State Department has not yet said how many - if any - U.S. citizens were on board, but Illinois Sen. Mark Kirk (R-Ill.) released a strong statement Thursday following the crash that indicated the number may be 23.

"A Russian-made surface-to-air missile has murdered 295 innocent people, 23 of whom are believed to be Americans," Sen. Kirk said. "Overdue Russian sanctions should expand to the oil and energy sectors immediately."

Initial information that 23 Americans were onboard was based on their English-looking names, but investigators are said to be double-checking before making anything official.

Several passengers on board a Malaysian jetliner shot down over Ukraine were world-renowned researchers heading to an international AIDS conference in Australia, officials said Friday.

"A number of people" on board the Boeing 777 were en route to the southern Australian city of Melbourne to attend the 20th International AIDS conference, which starts Sunday, Australian Foreign Affairs Minister Julie Bishop told reporters in Brisbane.

Also, according to U.S. Intelligence reports, there was an American spy satellite over the area, but its data doesn't pinpoint the missile launch site. Other satellites are now being checked.

Malaysia MH17 was traveling from Amsterdam to Kuala Lumpur with 280 passengers and 15 crew members on board. The last known position was over Ukrainian airspace, the airline said, but Ukraine air traffic controllers then lost contact. The plane took off at 6:14 a.m. ET, and crashed about five hours later. It was expected to arrive at Kuala Lumpur International Airport at 6.10 am (Malaysia local time) the next day.

Ukrainian government adviser Anton Gerashenko said on his Facebook page the plane was flying at an altitude of 33,000 feet when it was hit by a missile fired from a Buk launcher, which can fire missiles up to an altitude of 72,000 feet. A similar launcher was seen by Associated Press journalists near the eastern Ukrainian town of Snizhne earlier Thursday, according to the AP.

An AP journalist reported seeing at least 22 bodies in the wreckage. The AP reports the plane appeared to have broken up before impact. The field around the burning wreckage was strewn with body parts and the belongings of the passengers Thursday, the AP reports. 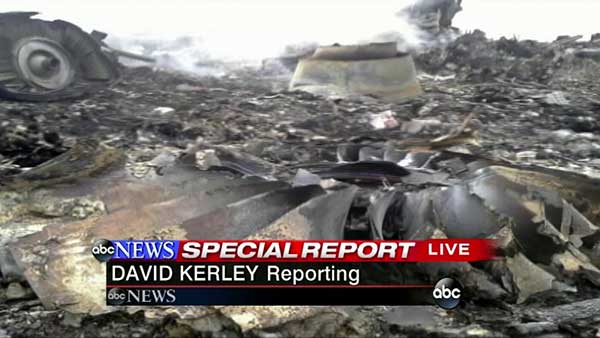 Malaysia Airlines flight MG17 plane reportedly crashes in Ukraine near Russia border
A plane that went missing in Ukraine Thursday near the Russian border may have crashed, and reports from Ukraine have indicated that the plane was shot down by a missile.

Ukraine's President Petro Poroshenko says the Armed Forces of Ukraine did not "take action against any airborne targets." Ukraine pro-Russia rebels say they didn't shoot down the airliner and blame Ukrainian armed forces.

In April, the U.S. government issued an order to all American air carriers - both commercial and freight - barring them from traveling in the airspace over Crimea and part of the Black Sea, one of the five Ukrainian flight zones. The decision came in response to Russia's decision to unilaterally take over control of the Crimea air region according to ABC News.

"The first thing investigators will do on scene is look for the four corners of the wreckage: the nose, tail and wingtips," former National Transportation Safety Board crash investigator Tom Haueter said. "If truly hit by a missile, big pieces of the plane will not be near the main body."

Haueter says a missile hit stands out, adding the investigators will review the flight data recorder and cockpit voice recorder. Haueter said he expects a great deal of data to be available when those are available. 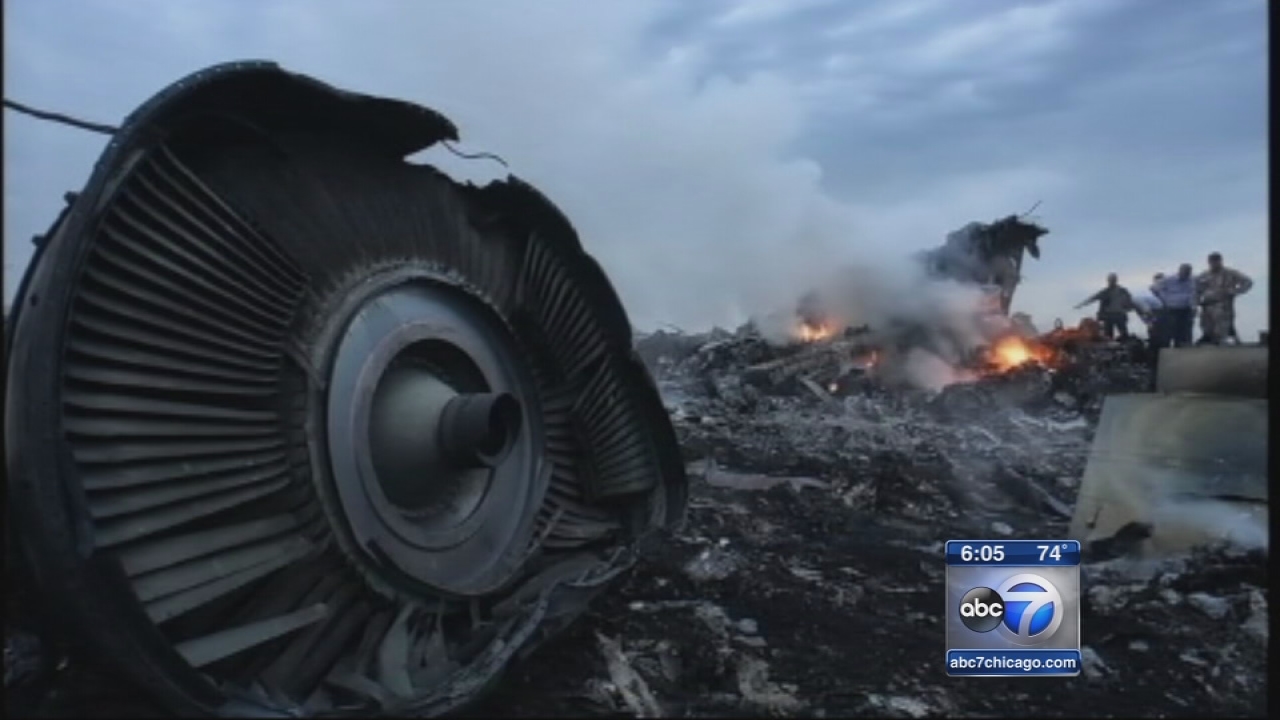 Will US be involved in MH17 investigation
Determining how the Malaysia Airlines jetliner was brought down could take days or even weeks, according to aviation experts.
Boeing tweeted from its official Twitter account that it is investigating the reports as well.

"Our thoughts and prayers are with those on board the Malaysia Airlines airplane lost over Ukrainian airspace, as well as their families and loved ones," the aircraft maker said in a statement.

The Donetsk region government said Thursday's plane crashed near a village called Grabovo, which it said is currently under the control of armed pro-Russian separatists. The region where the flight was lost has seen severe fighting between Ukrainian forces and pro-Russia separatist rebels in recent days, and several plane crashes. 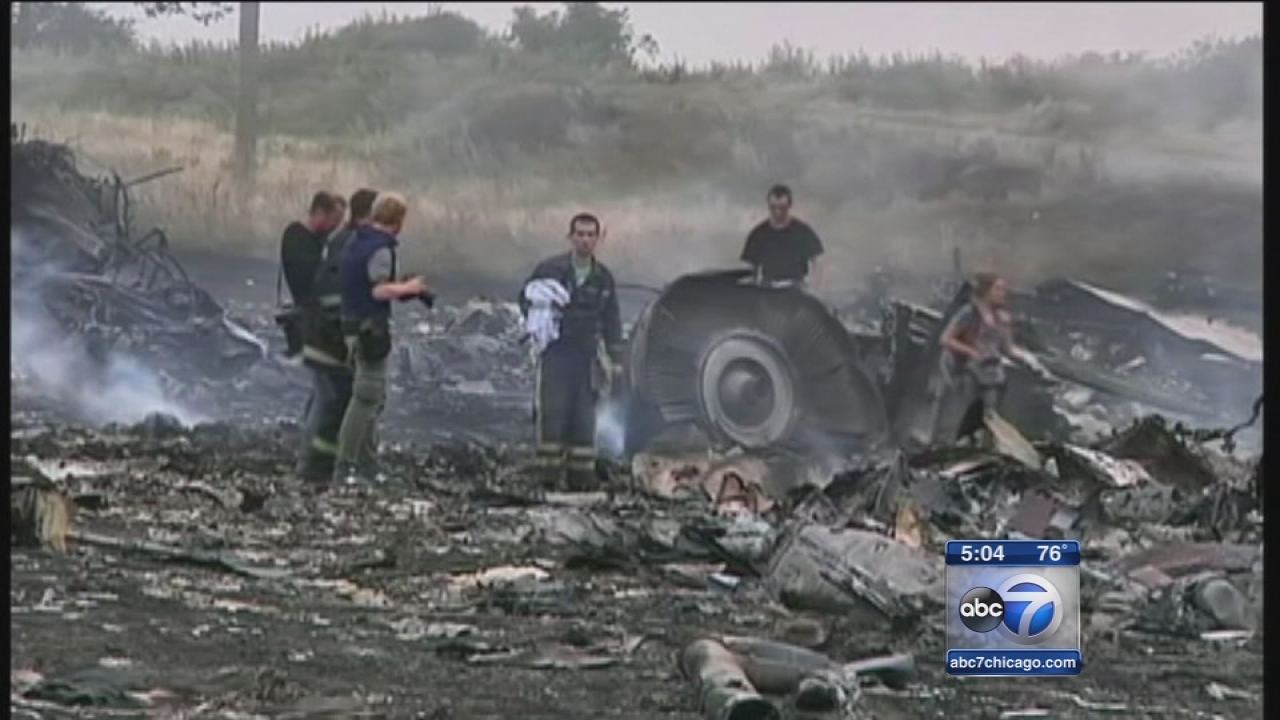 Plane crash adds pressure to end Ukraine civil war
Russia and Ukraine have been conflict over the area near where Malaysia Airlines Flight MH17 crashed. Ukraine is at civil war, which has been going on since the Ukrainian Revolution in February.
On Wednesday evening, a Ukrainian fighter jet was shot down by an air-to-air missile from a Russian plane, Ukrainian authorities said Thursday, adding to what Kiev says is mounting evidence that Moscow is directly supporting the separatist insurgents in eastern Ukraine. Security Council spokesman Andrei Lysenko said the pilot of the Sukhoi-25 jet hit by the air-to-air missile was forced to bail after his jet was shot down.

Pro-Russia rebels, meanwhile, claimed responsibility for other strikes Wednesday on two Ukrainian Sukhoi-25 jets. The Ukrainian Defense Ministry said the second jet was hit by a portable surface-to-air missile, but added the pilot was unscathed and managed to land his plane safely.

Ukraine said an AN-26 military transport plane was also shot down Monday by a missile fired from Russian territory.

"In recent days, this is the third tragic accident after the Russian territory were downed aircraft AN-26 and SU-25 Armed Forces of Ukraine. We do not exclude that this aircraft was also shot down, and stress that the Armed Forces of Ukraine did not commit any action to defeat the purposes of the air. President of Ukraine on behalf of the State expresses its deep and sincere condolences to the families and relatives of the victims of this terrible tragedy. Made all possible search and rescue activities," Poroshenko's statement said. "The perpetrators of this tragedy will be brought to justice."

On March 8, Malaysia Airlines Flight MH 370 en route from Kuala Lumpur to Beijing disappeared over the ocean near Asia and has yet to be found 131 days later. The search has been concentrated in the Indian Ocean far west of Australia.

The last civilian airplane to be brought down by a missile was also in Ukraine. In 2001, Siberia Airlines Flight 1812, a Tupolov 154, was crashed October 4, 2001 over the Black Sea by a surface-to-air missile, fired from the Crimea peninsula during an exercise of the Ukrainian military.

Thursday's crash comes a day after the U.S. announced new sanctions against Russia. The United States and Europe are seeking to maintain a united front against Russia with coordinated announcements of new economic sanctions, but divisions persist over how aggressive the West should be in punishing Moscow for its threatening moves in Ukraine.