Man, 87, shot in eye with paintball gun on South Side, may lose vision 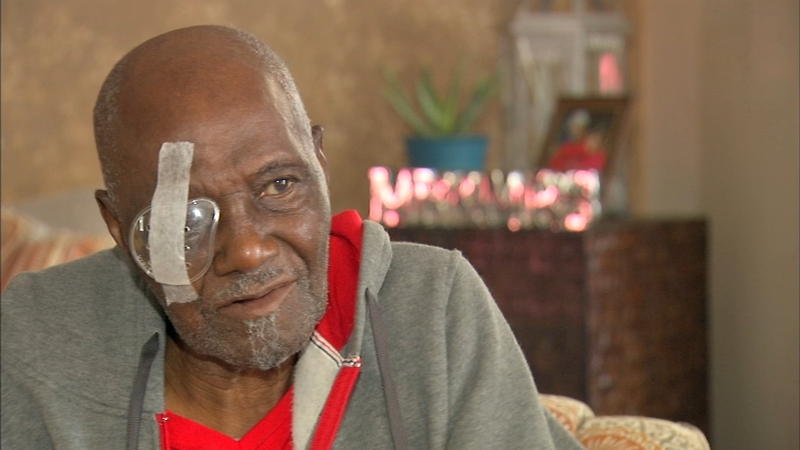 Chicago man, 87, shot in eye with paintball gun on South Side, may lose vision

CHICAGO (WLS) -- An 87-year-old Chicago man is recovering after he was shot in the eye with a paintball gun on the city's South Side, but he may permanently lose his vision.

Police are now searching for the person who opened fire on Lee Ingram with a paintball gun.

With his right eye bandaged and bruised, Ingram knows he's lucky it was only a paintball gun used in the shooting Monday afternoon around 3 p.m.

"It hit me in my eye and knocked me to the ground and I just laid there," Ingram said.

Ingram was shot on his way to visit friends who live in the city near 74th Place and Racine Avenue.

He said he was struck as he got out of his car to walk into a neighborhood store. Ingram's dark blue car is still stained with yellow paint pellets.

"I covered when I got hit in the eye like that. I put my hand over this eye and shut this one and I laid under the car, the back of my car, and they left," Ingram said.

He was also hit in the back and was rushed to an area hospital.

Ingram underwent emergency surgery to try to repair a cut in his damaged eye, but the procedure was unsuccessful.

The retired construction worker may never have full vision, and he could even end up losing his right eye.

While Chicago police have pulled security camera footage from the area as they continue to investigate, Ingram's daughter doesn't understand why someone would want to hurt her elderly father.

"Whether it happened to you before or you just seen what happened to my dad, we want some type of information," said Lena Jones, Ingram's daughter.

Ingram is warning others about the danger as he struggles not only with the possibility of losing his sight, but also his independence.