Man with long gun arrested in Loop charged with 5 felonies 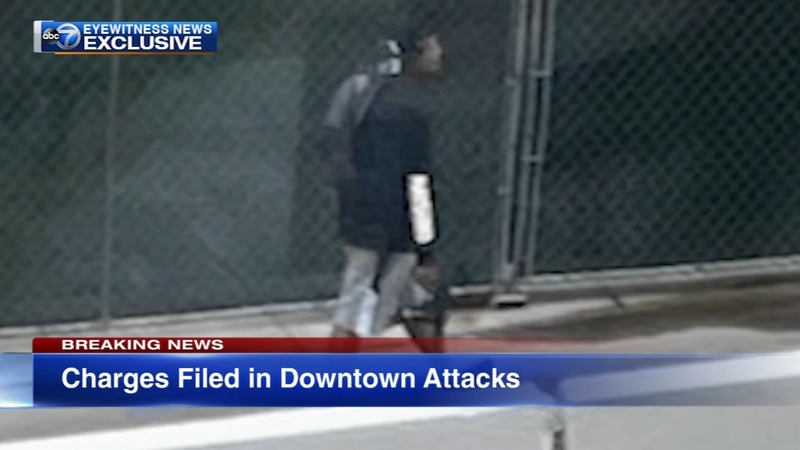 Man with long gun in Loop charged for violent attacks

CHICAGO (WLS) -- The man seen carrying a gun in downtown Chicago with a bag full of ammunition after he allegedly attacked two women in the Loop Thursday morning has been charged.

The man, identified as Torey Jones, was arrested near Lake and Wabash. He is now charged with five felonies, including aggravated battery with a deadly weapon.

Jones was arrested just before 10 a.m. at Lake and Wabash, minutes after police said he somehow managed to first assault one woman, punching her and striking her on the head outside of Macy's, then robbing another less than a block away.

A CTA repair crew saw him in the moments before both incidents and described him as casually walking down State Street.

"We were working on the escalator and a lady ran up to me and said, 'There's a man with a gun,'" witness Marco Velasco said. "And I asked her where and it was down there. He was walking towards us with a machine gun."

A man carjacked one woman and hit another with a rifle in the Loop Thursday morning, Chicago police said.

A flood of 911 calls came in about the armed man. Dispatchers noted that the gun was on full display, no attempt even made to hide it.

The CTA crew took shelter as they waited or police to arrive.

"I was in the Army, and when you don't have a gun there's only one thing to do: hide or run," Velasco said.

The entire episode took place in the space of 10 minutes. Investigators said the suspect took the second woman's belongings, but left the vehicle she was in behind and continued on foot.

When confronted with a responding officer, he is said to have first pointed his rifle at the officer, before throwing it on the ground and attempting to run away.

Officers in the @ChicagoCAPS01 District recovered the weapon below & placed one offender into custody, after responding to a person with a gun.

This is just another example of how our officers continue to run towards danger to protect the residents of #Chicago #CPDMediaCar pic.twitter.com/6nFAhjFYgY

A large number of unspent bullets were collected from around his feet following what appears to have been a full body search.

"I was in the army and when you don't have a gun, there's only one thing to do: hide or run," Velasco said. "So that's what we did. We went down the escalator and I called 911. I just stayed put for about 30 minutes."

A 19-year-old woman was hospitalized with a head injury. No information has been released on her condition.