Suspect charged with fleeing prosecution, will be extradited to Louisville
WLS
By Cate Cauguiran and ABC7 Chicago Digital Team
MARKHAM, Ill. (WLS) -- Markham police said a man has been charged after bringing dismembered human remains in luggage he brought with him from Kentucky to visit relatives.

Police said Melvin Martin Jr., 30, is being charged as a fugitive fleeing prosecution. An extradition hearing will be held as soon as Thursday morning and he will be taken back to Kentucky for prosecution, police said.

"This was a particularly heinous crime in that the offender in this case dismembered her body," said Markham Chief Terry White,

Markham police said Martin took a Greyhound bus from Kentucky to Chicago "a few days ago" where he was picked up by relatives and taken back to their home near 164th and Wood. His family told police he had several pieces of luggage with him that he was very protective over.

Police said Tuesday morning Martin left his relatives' home and went to the Markham Public Library. While there, a curious relative opened one of the bags and found body parts inside. The family called police, who discovered more human remains in the other bags.

Police arrested Martin at the library, and took him in for questioning. Law enforcement from Louisville traveled to Illinois to interview the suspect, police said. After initially resisting, Martin is now cooperating with law enforcement, according to Markham police.

"It's hard just to grasp that someone can do something like this," said resident Reginald King. "You see it in movies, you hear about it, but to actually happen in your neighborhood. Wow."

Police said the victim was Martin's 31-year-old girlfriend in Louisville, Ky. They believe her death began as a domestic assault, and that Martin allegedly killed her during that assault. Police said Martin dismembered the body, waited at least 30 days, then took some of the remains to Markham in a suitcase, a tote and possibly another bag.

"They did the right thing," King said of the relatives, "and I just pray for the family."

"Without their cooperation in this case our investigation would have been greatly hampered," said Chief White.

Some bags contained internal organs, and among the body parts brought to Illinois was the victim's head, police said.

Police said that Martin told them that he brought the remains with him because he "wanted to remain with her, or at least part of her."

After his arrest, police said Martin gave Kentucky investigators the location of the victim's upper torso, which was then found in a park near where she lived with the suspect Wednesday afternoon.

Markham police said they are working with federal law enforcement and police in Kentucky, and have not identified the victim pending notification of next of kin and positive identification through dental records.

A murder warrant has been issued in Kentucky for after Martin is extradited.
Report a correction or typo
Related topics:
markhamkentuckybizarrefugitive arrestwoman killedu.s. & worldbody part found
Copyright © 2020 WLS-TV. All Rights Reserved.
BIZARRE 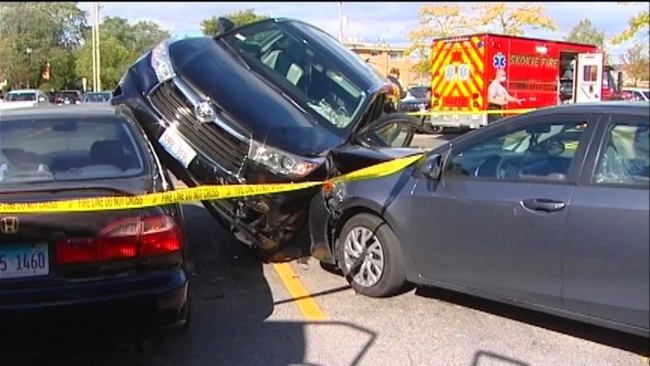 SUV drives onto 2 other cars in Skokie Aldi parking lot