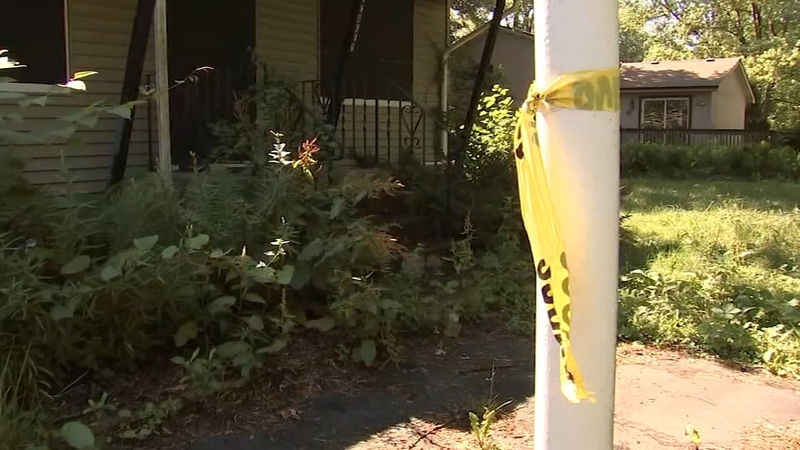 CHICAGO (WLS) -- A well-known community activist is on a mission to make sure a little girl gets justice.

Four years ago, the body of a baby was found after a fire in a home in Markham and people in the neighborhood believe criminal charges are long overdue.

"It reminds me of a graveyard across the street from me," said one neighbor.

Torn caution tape, a doll and crayons are what remain at an abandoned property in where a 1-year-old Anna Marie Townsend was found dead after a fire in 2017.

The medical examiner ruled her death a homicide.

Four years after the discovery, neighbors said they're upset the case has not been solved.

Those who spoke up didn't want to show their faces because they fear for their safety.

"[It's] very disturbing, knowing that there's killers out there that kills babies," a neighbor said.

"The baby's body had been abused. The rib cage, the whole extremity of the body shows signs of abuse," said community activist Andrew Holmes.

Holmes is determined to make sure Townsend will not be forgotten as he urges Markham police and the Cook County State's Attorney to bring the killer to justice.

In a statement to the ABC 7 I-TEAM, the Cook County state's attorney said, "While we have been in contact with the Markham Police Department, prosecutors have not been asked to review information for criminal charges related to this incident. The Cook County State's Attorney's Office is committed to seeking justice for victims and will continue to provide support and resources to the police as they further investigate this crime."

"This is an extremely difficult case. The investigation is ongoing and we've been working closely with the State's Attorney's office. It's going to take time to bring this case to closure, but are actively working this case," added Markham Police Chief Terry White.

Holmes said he's dedicated to holding the authorities to their word.

"In the state of Illinois, it seems like you can get away with murder," Holmes said. "We see enough gun violence as it is, but when it comes down to a child getting murdered or killed, there's nothing there to protect the dead child, nothing there to protect the dead baby. And that's an insult."
Report a correction or typo
Related topics:
markhambaby deathi teaminfant deathsdeath investigation
Copyright © 2022 WLS-TV. All Rights Reserved.
BABY DEATH
Family of Will County toddler found dead reaches $6.4M settlement
Milwaukee woman charged in 2009 'Baby Theresa' cold case
CPSC issues warning on infant loungers
Newborn found dead in duffle bag outside CFD station: police
TOP STORIES
Death toll rises to 22, mostly children, in TX school shooting
Uvalde school shooting: What we know about 19 kids, teacher killed
Father of Texas yoga instructor accused in cyclist's murder speaks out
Gary teen killed in shooting identified by family
Woman shot near CTA Red Line stop on South Side
Biden says 'we have to act' after Texas school shooting
Chicago expected to move to 'high' COVID level by Friday, Arwady says
Show More
1 killed in 10-vehicle crash on I-294 in Glenview
Long COVID symptoms mainly affect women in their 40s, study finds
Watch Steve Kerr's raw, emotional plea after Texas shooting
How to talk to kids about Texas school shooting
Illinois leaders call for gun control after deadly school shooting
More TOP STORIES News