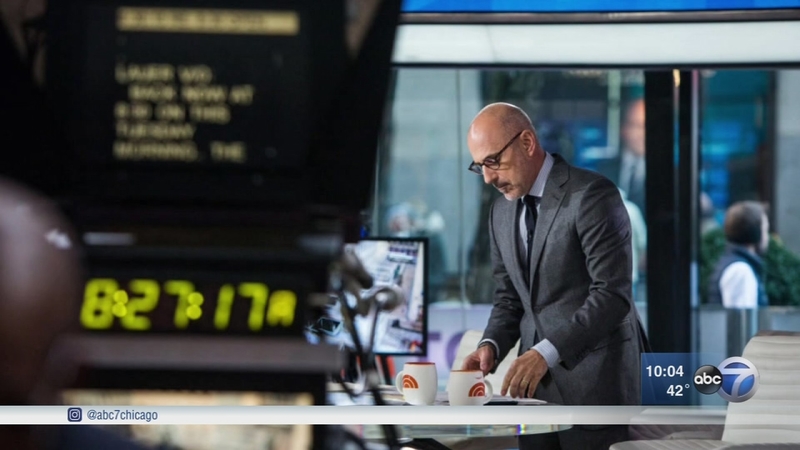 NEW YORK -- "Today" show host Matt Lauer was fired for what NBC on Wednesday called "inappropriate sexual behavior" with a colleague and was promptly confronted with a published report accusing him of crude and habitual misconduct with other women around the office.

With his easygoing charm, Lauer has long been a lucrative and highly visible part of NBC News and one of the highest-paid figures in the industry, and his downfall shook the network and stunned many of the roughly 4 million viewers who start their day with him.

He is easily one of the biggest names brought down in recent weeks by the wave of sexual misconduct allegations that have swept through Hollywood, the media and politics.

Network news chief Andrew Lack said in a memo to the staff that NBC received a complaint about Lauer's behavior on Monday and determined he violated company standards. NBC said the misconduct started when Lauer and a network employee were at the Sochi Olympics in 2014 and continued beyond that assignment.

Lack said it was the first complaint lodged against Lauer in his 20 years at NBC, but "we were also presented with reason to believe this may not have been an isolated incident."

Earlier Wednesday, it was left to Lauer's shaken "Today" colleagues, Savannah Guthrie and Hoda Kotb, to break the news to viewers at the top of the morning's show.

Word of Lauer's abrupt exit came on the day of NBC's "Christmas in Rockefeller Center" special featuring the annual Manhattan tree-lighting ceremony. Lauer was to have co-hosted the Wednesday night program with Guthrie, Kotb and Al Roker.

Hours after the firing, the trade publication Variety posted what it said was a two-month investigation that included dozens of interviews with current and former staffers who asked to remain anonymous.

Among other things, Variety reported allegations that Lauer once gave a colleague a sex toy with an explicit note about how he wanted to use it on her; that he exposed himself to another female co-worker; that he would question female producers about their sex lives; and that he would talk about which co-hosts he would like to sleep with.

Messages to Lauer and his agent were not immediately returned, and NBC would not say whether he denied or admitted to any wrongdoing. He is married with three children.

Lauer becomes the second morning host in a week to lose his job over sexual misconduct allegations. CBS fired Charlie Rose after several women who worked for him complained about his behavior.

In other developments, former "Prairie Home Companion" host Garrison Keillor was cut loose by Minnesota Public Radio over an allegation of "inappropriate behavior." MPR gave no details, but the 75-year-old Keillor said he inadvertently put his hand on a woman's bare back in an attempt to console her.

Lauer, 59, has essentially been the king of television morning news since first being paired with Katie Couric on "Today" in 1997.

For many years, "Today" was the unquestioned ratings leader, until it was eclipsed by ABC's "Good Morning America" following the ugly 2012 firing of Lauer's co-host Ann Curry. The show had stabilized in recent years with Lauer's pairing with Guthrie.

Lauer's "Where in the world is Matt Lauer?" segments were popular for years, and he regularly played a lead role at the Olympics and other major news events.

The flood of allegations was set off in large part by the downfall of Hollywood studio boss Harvey Weinstein, who has been accused of sexually assaulting or harassing numerous women.

Ari Wilkenfeld, the attorney for Lauer's accuser, praised NBC for acting "quickly and responsibly" in response to the morning host's "egregious acts of sexual harassment and misconduct." The lawyer did not identify his client.

Lack, in his memo, said, "We are deeply saddened by this turn of events. But we will face it together as a news organization - and do it in as transparent a manner as we can."

An immediate challenge is filling a giant hole on a show that has long been the most lucrative for NBC News. One potential replacement, Willie Geist, on Wednesday called Lauer someone "I have always looked up to in the business, and he taught me a lot."

As for Keillor, Minnesota Public Radio said it will end distribution of the radio program "The Writer's Almanac," Keillor's daily reading of a poem and telling of literary events, and end rebroadcasts of old "Prairie Home Companion" episodes.

"I meant to pat her back after she told me about her unhappiness and her shirt was open and my hand went up it about six inches. She recoiled. I apologized. I sent her an email of apology later and she replied that she had forgiven me and not to think about it," Keillor said in an email to the Minneapolis Star Tribune. "We were friends. We continued to be friendly right up until her lawyer called."

On Wednesday's show, Guthrie appeared to fight back tears as she called Lauer her friend who is beloved by many at NBC. She said she was "heartbroken for my colleague who came forward to tell her story and any other women who have their own stories to tell."

"How do you reconcile your love for someone with the revelation that they have behaved badly? I don't know the answer to that," she said. "But I do know that this reckoning that so many organizations have been going through is important, it's long overdue, and it must result in workplaces where all women, all people, feel safe and respected."

Later in the show, NBC's Megyn Kelly, who has written about being sexually harassed by former boss Roger Ailes at Fox News Channel, noted the anguish on the faces of her colleagues but said, "What we don't see is the pain on the faces of those who found the courage to come forward, and it is still a terrifying thing to do."

On Twitter, President Donald Trump said, "Wow, Matt Lauer was just fired from NBC for 'inappropriate sexual behavior in the workplace.' But when will the top executives at NBC & Comcast be fired for putting out so much Fake News."

Trump also alluded to potential misconduct by three other NBC News figures, while offering no details.

Natalie Morales, a former "Today" show colleague who left the show for "Access Hollywood" last year, said she was in shock about the story. She referred to stories that said she and Lauer had an affair, which they both denied.

"I have personally dealt with rumors in the past few years that were hurtful to me and to my family," she said. "They diminished my hard work. I've addressed these rumors head-on in the past. It's not the story today."

Another former "Today" host, Deborah Norville, said she was stunned by the news.

"As a journalist, it's upsetting to see another from our ranks caught up in these kinds of scandals. But as we've seen, no profession is immune," she said. "Sadly, I doubt if anyone will be surprised if there are similar headlines to come."

Many are asking if the flood of sexual misconduct allegations that began with revelations about Harvey Weinstein will be a watershed moment for workplace harassment.

From America's long-time national TV morning host, to a beloved storyteller, to comedians, including one who became a politician, to the Hollywood mogul whose serial mistreatment of women started this reckoning with an age-old problem, many are asking if this is the moment that will bring about change.

"It has to be," said Denise Bindelglass Morris, human resources professional. "If this is not a turning point after the enormous numbers of people coming forward and the egregiousness of the behaviors involved."

That's a point that's resonating across social media. In a Facebook poll, respondents said they believe sexually harassment should soon go away. Bindelglass helped write Playboy Enterprise's sexual harassment policy in the early 1990s following the Clarence Thomas Supreme Court nomination hearings. He was accused by Professor Anita Hill of improper behavior, but still got on the court.

"We had a female CEO who absolutely cared about the issue and we wanted to be proactive about protecting our employees," she said. "If more women sat on boards or were leaders of major organizations and companies, and more women in Congress and politics, then we would not see this happening."

Longtime Vanity Fair editor Tina Brown said sexual harassment has been an occupational hazard for any woman in the workforce.

"For the first time the establishment power is listening to women, which is really an extraordinary thing," Brown said.

"There is such a national and international conversation happening that if we don't, if our leaders don't embrace this and cause change to happen, we will have missed a huge opportunity," Bindelglass said.

The question now is also about what do when they are harassed by someone who is not in a high profile job.

LIST OF MEN IN MEDIA ACCUSED OF SEXUAL MISCONDUCT

Since The New York Times published allegations of sexual harassment and assault against Hollywood mogul Harvey Weinstein in October, multiple men in entertainment, media and politics in the U.S. and beyond have faced allegations ranging from inappropriate behavior to forced sexual misconduct to rape. A look at the men in media and publishing who have been accused since the Weinstein allegations emerged:

- "Today" show host Matt Lauer - Accused of inappropriate sexual behavior. He was fired and did not respond to a request for comment.
- Former "A Prairie Home Companion" host Garrison Keillor - Accused by one woman of inappropriate behavior. He was fired by Minnesota Public Radio. He told The Associated Press he was fired over a story and told the Minneapolis Star Tribune that he put his hand on a woman's bare back in an attempt to console her.
- Billboard magazine executive Stephen Blackwell - Accused of sexual harassment by one woman. He has resigned from the magazine.

- Journalist Mark Halperin - Accused of harassing about 12 women while at ABC News. Book contract terminated. Fired from job at NBC News. He has denied some of the allegations.

- Artforum publisher Knight Landesman - Accused by multiple women of sexual harassment and sued by one woman. He has resigned from the magazine.

- NPR news chief Michael Oreskes - Accused of inappropriate behavior or sexual harassment by at least four women while at The New York Times, NPR and The Associated Press. He has been ousted from NPR.

- Amazon executive Roy Price - Accused by one woman of sexual harassment. He resigned from Amazon.

- PBS and CBS host Charlie Rose - Accused by several women of unwanted sexual advances, groping and grabbing women, walking naked in front of them or making lewd phone calls. He has apologized for his behavior, but has questioned the accuracy of some of the accounts.

- New York Times White House reporter Glenn Thrush - Accused of making drunken, unwanted advances on women. He disputes some of the accusations but has said he had had a drinking problem and apologized for "any situation where I behaved inappropriately."

- Rolling Stone publisher Jann Wenner - Accused by one man of sexual harassment. He says he did not intend to make the accuser uncomfortable.

- New Republic editor Leon Wieseltier - Accused of sexually harassing numerous women. Removed from the masthead of The Atlantic magazine. He has apologized for his behavior.

- NBC News booker Matt Zimmerman - Accused of inappropriate conduct by multiple women at the network. He was fired from NBC.